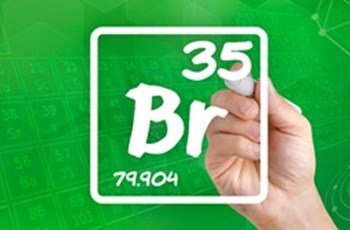 According to researchers at Vanderbilt University, bromine should be recognized as the 28th essential element for all species, from fruit flies to humans. Study results were published June 5, 2014 in Cell, and demonstrate that without bromine, collagen type IV molecules will not bond together properly to form the structural proteins of connective tissues, leading to disrupted tissue development. 1

To find out more details, here is a YouTube video explaining their work.

This figure demonstrates bromines role as a co-factor in formation of collagen IV crosslinks: 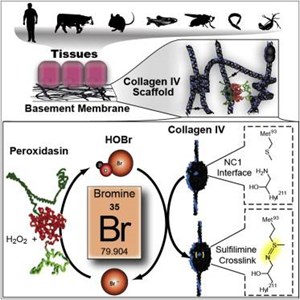 At this point it may be premature to say that bromine should be added to the list of elements essential to human life until this work is unequivocally confirmed by other researchers in humans. Nevertheless it is very exciting to hear that bromine is apparently essential to collagen formation in species throughout the phylogenetic spectrum, from insects to humans.

Bromine toxicity, or bromism, is a result of excessive bromine consumption or exposure. Bromism presents itself as neurological symptoms such as headache, slurred speech, confusion, hallucinations, stupor and coma. 11 Although bromism is rarely seen today, it was common decades ago when bromine-containing medication was readily available. In many cases bromism was misdiagnosed and patients received higher doses of bromine to try and prevent the symptoms caused by bromine, only to make things worse. A serum bromide concentration >500 mg/L (Extremely High!!) is confirmatory for bromism. Symptoms are rarely seen below this level. 12

Very few human studies have been completed, primarily because the effects of bromine at lower levels have yet to be elucidated. In one study 21 healthy volunteers were given 1 mg bromide/kg body weight (the current acceptable daily intake) for 8 weeks, and no significant changes were observed in serum hormone concentrations (thyroid hormones, cortisol, testosterone, estradiol, progesterone ). 13  This study was repeated with concentrations of 0, 4 or 9 mg bromide/kg body weight, and a significant, but within normal range, increase in thyroid hormones was seen in female subjects at the highest supplement level. 14

Multiple rat studies have shown the toxic effects of bromine at high supplemental levels. It was demonstrated that during periods of iodine deficiency the symptoms of hypothyroidism were enhanced when high levels of bromide were added to the diet. 15  In a similar study, high rat bromide intake resulted in decreased radioiodine accumulation and a reduced half-life of iodine from 92 to 30 hours in the thyroid. This was observed in both rats fed an iodine sufficient and iodine deficient diet. 16  Breast milk iodine transfer in rats was also significantly decreased when bromine intake was increased. 17

Like the essential elements iodine and selenium, new research points to bromine as an essential element in the human body. It will take many years of research to determine the dietary range in which bromine is required. Information on bromine toxicity is readily available, but sufficient and deficient dietary intakes have yet to be determined.

Learn more about ZRT Laboratory's multi-element analysis in dried urine that measures bromine and other essential and toxic elements.