5 Spices to Warm Your Soul During Winter 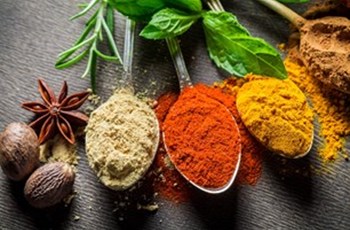 Spices are the delightfully aromatic plants whose warming scents are a characteristic element of the winter season. In fact, there are five spices that evoke memories of sitting by the fire on cold nights, weekends of playing in the snow, and social gatherings that feature rich seasonal desserts and mulled wine.

A spice is harvested from the root, bark, seed or dried fruit of a tropical plant or tree. The aroma or flavor comes from essential oils. Many spices contain similar essential oils but in different proportions. These oils are released through the physical process of grinding, grating or crushing. The essential oils begin to evaporate after processing and the flavors of the spices will fade over time. In contrast, the original bark, seeds, or berries can often stay fresh for years.

But there is more to these exotic plants than just their sweet or pungent flavors. In ancient times spices were used in almost every aspect of life whether in flavoring and preserving food, to freshen one’s breath, or to being applied or ingested as medicine.  Let’s look in more detail at those well-known spices associated with the winter season: allspice, cinnamon, cloves, ginger, and nutmeg.

Allspice (Pimenta dioica) comes from the dried berries of a tree native to Jamaica, Mexico and Central America. The name “allspice” was coined by the English because it has the combined flavor of cinnamon, nutmeg and cloves. With its peppery flavor it is a common component of Caribbean cuisine and Jamaican jerk seasoning, and in mole sauces, curries and in pickling. In the United States it’s mostly used in spiced cider or mulled wine and in seasonal desserts.

While most other spices came from Asia, allspice was exclusively grown in the Western hemisphere. Imported to Europe it became quite popular. In the cosmetic industry the pimento oil, distilled from the leaves of the allspice tree, is used to boost the scents of fragrances and as a natural deodorizer.

Allspice is a digestive and carminative due to the volatile oil, eugenol. Similar to other spices containing the oil, allspice also has anti-bacterial and anti-inflammatory properties. As a folk medicine, allspice was applied topically for bruises, muscle aches, and rheumatism due to its vasodilating effects on blood vessels. Recent investigations have focused on the constituents of allspice – eugenol, quercetin and gallic acid – for their antioxidant activity and possible beneficial effects on the incidence of cancer.

Cinnamon (Cinnamomum zeylanicum and C. cassia), is harvested from the inner bark of several trees of the genus Cinnamomum, native to India. Cinnamon’s characteristic taste and smell is due to its primary constituent, cinnamaldehyde, an essential oil.  Eugenol, copane, cinnamyl acetate and camphor are found in smaller amounts. Used to flavor meat and curry dishes in the East, in the West cinnamon is more typically added to sweet dishes and desserts.

Rich in antioxidants, cinnamon helps reduce free radicals, exhibits anti-inflammatory properties, aids in stabilizing lipids and blood sugar, and may have beneficial effects on neurogenerative diseases. Several clinical trials have shown cinnamon cassia to improve glycemic control in patients with pre-diabetes and with high pre-treatment HbA1c levels.  These studies show the potential for cinnamon as an add-on therapy for managing type-2 diabetes. However, the zeylanicum species of cinnamon may be a safer alternative to cassia, because it has lower levels of coumarin, a blood thinner.

Cloves (Syzyium aromaticum) are the dried flower buds of a tropical, evergreen tree from Indonesia. Historically clove was one of the most prized spices in Europe. A pomander ball, usually an orange studded with cloves, is a traditional Christmas ornament and New Year's gift. Clove is a curious ingredient in the widely smoked Indonesian cigarettes, “kretek,” which lends a distinctive aroma and flavor when smoked. Commonly used in traditional Indian dishes, clove’s strong, pungent flavor can sometimes overpower other flavors and should be used sparingly.

On the medicinal side, clove's volatile oils, one of which is eugenol, impart anti-inflammatory and antiviral/antibacterial properties. Frequently employed for a toothache, clove is also helpful for other oral conditions such as gingivitis and halitosis, due to its antibacterial effect. The spice has been used in respiratory conditions, as an expectorant for coughs and to sooth sore throats. Clove is also a rich source of antioxidants supporting the immune system [1].

Ginger (Zingiber officinale) is a plant whose root or rhizome is commonly used cooking as well as in medicine. Originating in Southeast Asia it has become widely cultivated in other countries.  Often considered an herb, ginger is technically a spice since it’s the root that’s used. Ginger is one of the main ingredients in the seasonal favorite gingerbread or ginger cookies. Its culinary uses include traditional Indian recipes such as masala chai and curry dishes. Pickled or candied ginger is quite common in Japan and China. And ginger ale was America’s favorite beverage for many years.

Ginger is a good source of vitamin C and minerals including magnesium, copper and manganese. Medicinally, ginger was used for digestive ailments and is known for its calming, carminative effect. Due to its ability to stimulate saliva flow, ginger has been studied as an antiemetic, alleviating motion sickness and morning sickness, and reducing the side effects associated with chemotherapy. Ginger promotes sweating and helps reduce body temperature during fevers. Its stimulating property improves peripheral circulation which may be helpful for high blood pressure. Ginger’s anti-inflammatory activity is potent. Gingerol, its volatile oil compound, is a better inhibitor of prostaglandin biosynthesis than a commonly prescribed non-steroidal anti-inflammatory drug (NSAIDS), indomethacin [2]. Additionally, recent research is exploring ginger as an anti-obesity agent.

Nutmeg (Myristica fragrans) is taken from the fruit kernel of a tropical evergreen tree native to Indonesia. Nutmeg has a special affinity for use in dairy dishes such as custard or pudding, but also in soups and other desserts. Historically this seed was used for stomach ailments, headaches and fevers.

A high-mineral spice, nutmeg is a source of manganese, copper and magnesium in beneficial amounts. Potassium and zinc, as well as several vitamins, are found in smaller quantities. The essential oils of nutmeg have been studied for their antioxidant properties and anti-angiogenic activity. Further investigations revealed anti-bacterial effects from ethanol extracts of nutmeg.

There is a caution in taking nutmeg in a large amount as it has psychoactive effects, acting as a hallucinogen. Although poisonings are rarely fatal, too much nutmeg can have the consequence of convulsions, palpitations and generalized body pain.

Usually spices are consumed from cooking and baking and not taken in large quantities.  However, at this time of year, the amounts of confections devoured may constitute a medicinal dose. It's just a good thing many of the spices are beneficial for the digestion!