Athletic Performance and the Menstrual Cycle: How to Tailor Workouts to Achieve Optimal Performance 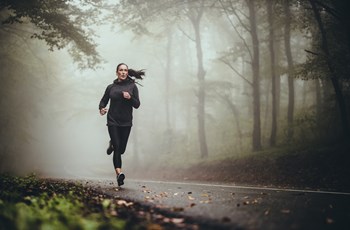 Overview of Hormones and the Menstrual Cycle

Training for athletic competition or exercising to stay healthy is already hard, but the unique physiology of hormone fluctuation due to the menstrual cycle can make it downright tough at times. Women can take advantage of understanding their hormones to optimize their training to their advantage and this is being used by the US Women’s World Cup Championship teams who use specialized training approaches that conform to the different phases of the cycle [1]. I hope after reading this blog, you can better understand what changes happen at the hormonal level and how to better harness these changes to perform your best. 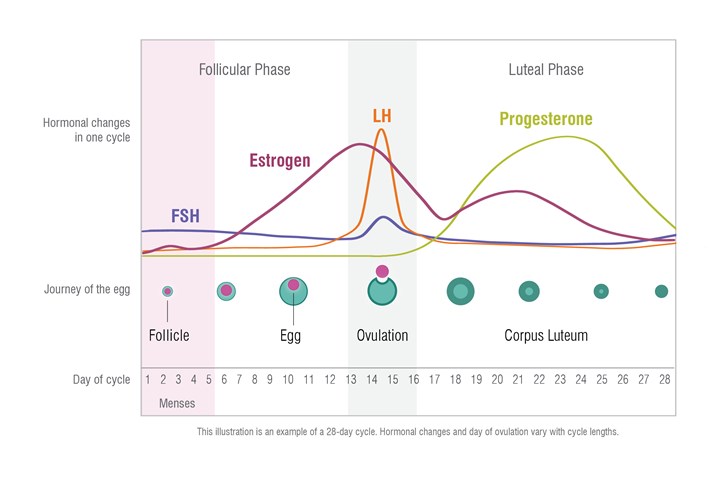 Oral contraceptives (OCs) are common among elite female athletes, with about half of the women competing at the Rio Olympic Games using some form of oral birth control [2]. While this is useful in preventing the cyclic nature of hormones during the menstrual cycle, it appears the OCs interfere with normal immune homeostasis. Data from the 2012 London Olympic Games showed women were 60% more likely to get sick, which affected training or competition. This increase in illness is likely a result of OC use with studies showing elevated C-reactive protein (CRP) levels among women using OCs than the women who were naturally cycling [2]. Another study also showed that cortisol levels were higher in the same high school women athletes 10 months after starting OCs than before they began taking them [3]. This increase in both CRP and cortisol in OC elite athletes is likely the cause of increased illness.

Let us look closer at the different phases and see how the change in hormones during each phase can be used advantageously for performance.

Periodic rises in estrogen levels to physiological levels are good as they provide a protective effect on tendon and muscle health.

The follicular phase is highlighted by menses. Approximately 75% of women athletes have negative side effects in relation to their menses [4]. However, this phase is not all bad for athletic performance, as a spike in estrogen after menses typically brings with it a boost of energy. During this part of the cycle, the female body is primed for high-intensity workouts and it is the best time for strength training. This is because of the effect estrogen has on the muscle, which will be detailed later in the blog. The rise in estrogen also increases the body’s ability to recover in between workouts. During this state of increased estrogen, it is also important to not overdo your activities. Estrogen increases type III collagen mRNA. This is in part responsible for decreased tendon stiffness during maximal muscle loading in women and decreases stiffness of the sinew, causing an increase in elasticity of the knee [5,6]. Studies have shown that there is an increased risk of anterior cruciate ligament (ACL) injuries during the late follicular phase [5,6]. The flip side of this is that women have much lower incidence of muscle strains and Achilles ruptures due to this decreased sinew stiffness. In professional soccer, women are 54% less likely than men to suffer a muscle strain or Achilles rupture [6]. This mostly translates to fewer groin and hamstring strains [6]. However, when taking OCs these risks change. OCs will decrease the ACL risk, but increase the Achilles tendon rupture risk [6]. OCs have also been linked to increased muscle damage and delayed muscle soreness [6]. Periodic rises in estrogen levels to physiological levels are good as they provide a protective effect on tendon and muscle health [6]. Finally, during this period women utilize stored carbs (glucose) much better, which allows for better endurance. Once estrogen levels spike, the body can’t utilize the glucose stores as efficiently due to the suppression of gluconeogenesis in the liver by estrogen and progesterone. During this time, carb loading is very important as these external carbs are the main source of fuel for female athletes. The follicular phase ends upon ovulation.

Ovulation begins when luteinizing hormone (LH) levels spike, the egg is released, and estrogen levels drop rapidly. However, during the three-to-five-day window prior to the ovulation portion of the cycle, estrogen levels remain very high, as well as a spike in LH. and it is an ideal time for strength training. But the body switches to fat as a fuel rather than glucose, which results in less available energy for high-intensity activities and carb loading is more important. As the luteal phase begins, estrogen declines and progesterone begins to rise.

The luteal phase is highlighted by a large increase in progesterone and a rebound of estrogen levels. With both estrogen and progesterone levels high, the body is not primed for high-intensity workouts. Endurance can also be affected at the end of this phase as there can be a drop in blood plasma volume, decreasing oxygen levels to the muscles [1]. Estrogen results in fluid retention and as estrogen levels begin to drop before menstruation, the fluid is redistributed causing this decrease in volume. It is very important to up protein intake during this time as the body increases protein catabolism due to the increased progesterone levels [1]. There could also be a slight disadvantage due to higher basal body temperatures, although this would only occur under extreme heat conditions.

There is no difference in relation to sex when looking at force in relation to muscle cross-sectional areas. Simply put, the bigger the muscle the more force it generates, regardless of gender.

When people think of muscle, they usually think of testosterone. However, estrogen plays a very important part in muscle structure and function and is usually overlooked. In fact, there is no difference in relation to sex when looking at force in relation to muscle cross-sectional areas (CSAs). Simply put, the bigger the muscle the more force it generates, regardless of gender. In one study of collegiate swimmers, there was found to be no difference in force-CSA between men and women [7]. Estrogen is an important factor in this because it is important for maintaining proper muscle conformations. This means the muscle fibers are aligned properly and the myosin heads are primed to bind with the strong binding site of the actin filament rather than the weak binding site [8]. Estrogen is responsible for more strong-binding reactions of myosin heads to actin, resulting in more force generation [8]. This is also suggestive of why women respond better to strength workouts during the late follicular phase when estrogen is highest.

Estrogen is also important in decreasing pro-inflammatory cytokines that can increase muscle breakdown [5]. Estrogen acts as an antioxidant and sarcolemma membrane stabilizer [5]. The sarcolemma is the muscular membrane and is responsible for the depolarization potential that makes muscles contract. Estrogen is important for myosatellite cell expansion, differentiation, and self-renewal [9]. Myosatellite cells act as stem cells for muscles and are important in muscle recovery and function [9]. These are very important because muscle cell nuclei do not replicate so to build new muscle or repair injured muscle, myosatellite cells are needed. When estrogen levels are higher, myofibrillar protein synthesis is higher and the decline of estrogen and progesterone levels as people age led to muscle weakness [6,8]. This age-related muscle weakness is a response by the muscle to lower estrogen levels that don’t allow for the proper muscular conformation [8].

Muscle fatigue is a common phenomenon that affects women more often than men, as well as longer recovery times [10]. The anti-fatigue protein, orosomucoid (ORM), is produced in the liver and exhibits many biological activities such as immunity modulation, binding and carrying drugs, maintaining the capillary barrier, and acts as a disease marker. ORM is significantly elevated in sera, liver, and muscle tissues of fatigued rodents [10]. ORM works by increasing glycogen storage and muscle endurance. The increase in muscle fatigue in women is tied to reduced ORM induction in response to fatigue. ORM is downregulated by estrogen via estrogen receptors and the p38 mitogen-activated protein kinase [10]. This suggests the best time for endurance activities is when estrogen is at it lowest during menses. 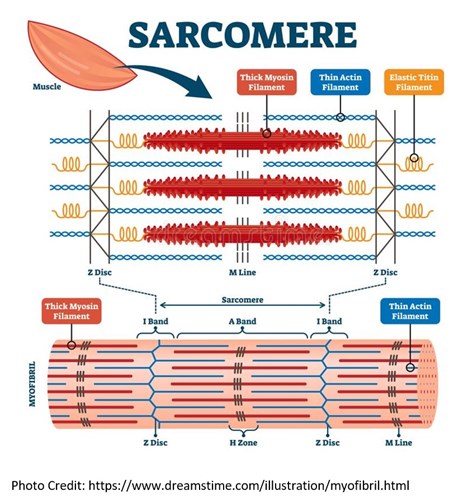 Now you may be asking yourself, estrogen is high in both late-follicular as well as mid-luteal phases, why does this increase in muscle strength and growth only occur in the late-follicular phase? This is a great question and progesterone itself is important for protein synthesis. But animal data has indicated that when estrogen and progesterone are present together, like in the mid-luteal phase, they may counteract each other [9]. Therefore, resistance training is best during the late-follicular phase only.

For OC users, a triphasic OC with low progestogen in the first two weeks also showed this same increase in resistance training response [9]. It has also been shown that women using OCs that contain constant amounts of ethinyl estradiol (EE) and progestins showed lower protein synthesis [9]. This suggest that progestins have an anti-androgen effect on protein synthesis when paired with estrogens.

How can you use all this information to enhance your training and performance? For women who are naturally cycling, it is important to understand the exact timeline of your cycle so you know when you are in each phase and can get the most out it. ZRT offers a menstrual cycle mapping kit that allows for accurate mapping of the menstrual cycle through testing of LH, and metabolites of progesterone and estradiol in urine. For women on hormonal birth control, it may be important to understand where your hormone levels are at while on the contraceptives. This is best done using our LCMS saliva profile. This profile tests for 18 hormones, melatonin, three steroid synthesis inhibitors, and most importantly, the synthetic estrogen EE. It is important to understand your EE levels to fully understand your full estrogen load on top of your estradiol (E2) levels. EE binds stronger to the estrogen receptor than estradiol and is therefore much more potent. The full estrogen load is a calculation of EE and E2 values to understand the estrogen receptor binding capacity.