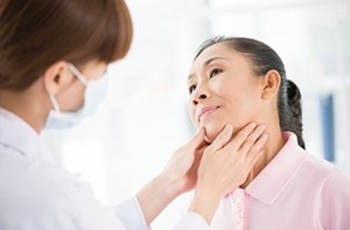 September was Thyroid Cancer Awareness Month. It's October now, but the increasing incidence of thyroid cancer makes it a timely topic for any time of the year.

In fact, something that every healthcare provider should know is that there's an expectation that 2014 will see a record number of papillary thyroid cancers being diagnosed, and the corresponding awareness campaign promotes a "neck check" for early detection and treatment. Additionally, it's hoped that heightened public awareness will encourage research leading to a cure for all types of thyroid cancer (TC).

My review of the research literature for thyroid cancer reveals a controversy around the upsurge of this common endocrine cancer. Are more frequent and sophisticated detection methods identifying the tumors at an earlier stage than in the past? Or is thyroid cancer really dramatically increasing in incidence?

The answer may surprise you.

TC is Among the Top 10 Most Common Cancer Types

National Cancer Institute statistics show a striking rise in the incidence of thyroid cancer worldwide in the last few decades. From 2007 to 2011, it has increased an average of 5.5% each year. It affects approximately 12.9 per 100,000 men and women per year, with deaths occurring at the rate of 0.5 per every 100,000 people.

An estimated 62,980 new cases of thyroid cancer will be diagnosed in 2014 – ranking it ninth in the top ten most common cancer types. Affecting women three times more often than men, the median age of diagnosis for thyroid cancer is 50. However, younger people are not exempt. And sadly, the highest percentage of deaths occurs among those people between 75 to 84 years of age, most often from medullary thyroid cancer.

Despite the numbers, some experts maintain that the explanation for the increase is due to diagnostic intensity as opposed to a true increase in disease occurrence. As one JAMA Network article declares, "...the increased incidence...is not an epidemic of disease but rather an epidemic of diagnosis."

One reason given for this perspective is that the escalation of thyroid cancer detections is primarily due to the most common type, papillary cancer, with no significant increase to follicular, medullary or anaplastic cancers. Moreover, mortality rates have remained stable since 1992, with only a slight rise in 2006. In an epidemic, an increase in mortality would be expected over time.

Is There an Issue of Over Detection?

Although this is a broad position, the concern by some is that over-diagnosis catches small tumors that may not cause problems for decades. In fact, autopsies frequently confirm small, undiagnosed thyroid cancers in patients who had died from other causes. In general, thyroid cancer has a slow progression, is symptomatic only when it's advanced, and it rarely causes death. So, it's unsurprising that it might be perceived to be overly diagnosed.

Critics claim early detection may result in unnecessary treatment, possible adverse consequences and unavoidable economic costs without any change in mortality. Because of this the American Thyroid Association has proposed new recommendations that only those with thyroid nodules >1 cm should be evaluated, if no additional risk factors are present.

Such risk factors include the following elements:

Other experts agree the growing number of incidental thyroid tumors diagnosed is due to the frequent use of ultrasound, cytology examinations and diagnostic procedures for different diseases. Nevertheless, these same authorities suggest improved detection may not represent the only source of the elevated incidence of thyroid cancer – environmental and lifestyle changes may also be a possibility.

Although the incidence of papillary carcinomas has had the most increase, researchers maintain that thyroid cancers of all types and stages have shown an upsurge, and this can't be explained by detection alone. Indeed, the incidence of thyroid cancer has risen in other parts of the world where medical imaging is less common, which suggests additional factors are responsible for frequency of occurrences worldwide.

Environmental concerns, dietary deficiencies and environmental exposures, are also factors for the development of thyroid cancer. Dietary risk factors consist mainly of iodine deficiency. Follicular thyroid cancer is higher in areas where iodine is deficient in the soil and not replaced in the diet via iodized salt or other iodine containing foods.

Environmental exposure is probably the chief factor in the incidence of thyroid cancer. Types of exposure consist of radiation through atmospheric sources (i.e., nuclear power plant accidents), ionizing radiation treatments for medical conditions unrelated to thyroid cancer, and diagnostic procedures such as medical and dental x-rays and CT scans.

For example, thyroid cancers peaked in the Ukraine after the accidental release of radioactive debris from the Chernobyl power plant in 1986. It must be noted that many radiologic diagnostic procedures involve the head and neck, which exposes the thyroid to risk. Head and neck CT scans and dental x-rays provide a measurable amount of radiation, which increases the risk for cancers in these areas. Consequently, thyroid shielding has been instituted by many dental offices to reduce the risk of thyroid radiation, especially for children.

Clearly the reason(s) for the increased number of thyroid cancer occurrences needs to be determined for better prevention, but raising awareness of thyroid cancer during the month of September – and, frankly, throughout the rest of the year – is a welcome step in this direction.