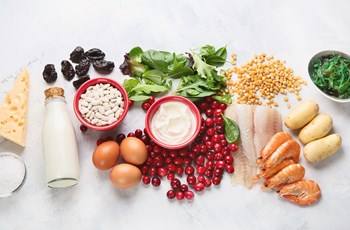 The use of iodine dates back to 4th century China where seaweed and burnt sea sponge were effectively used to treat goiter. It was not until 1811 that iodine was isolated as a specific element that exhibited properties similar to the other halogens of bromine, chlorine, and fluorine. In 1829, Jean Guillaume Auguste Lugol, MD, introduced potassium iodide as an effective treatment for the effects of tuberculosis, and John Murray, MD, used iodine to treat croup, asthma, consumption, and other respiratory diseases [1].

Tincture of iodine has been a staple in every first aid kit for the treatment of wounds to prevent infection and support healing. Surgeons scrub up with a betadine solution and paint it on the body of those undergoing surgery to assure the skin is free of microbes. Over its long history, iodine has been used as an effective treatment for goiter, upper respiratory infections, asthma, and croup. It has also been used as an antiseptic, disinfectant, an expectorant, an amoebicide, and an anti-syphilitic remedy. Iodine has also been used topically for the treatment of various skin disorders [1].

Iodine Deficiency Disorder is the most common endocrinopathy in the world and is also the most preventable.

Iodine is a very versatile element in that its mechanism of action is somewhat determined by where it is stored in the body. The thyroid gland needs iodine to make thyroid hormones, which support growth, metabolism, and cognitive development, but iodine is also concentrated in numerous extrathyroidal tissues where it acts intracellularly as an antioxidant, supports cellular differentiation, has anti-inflammatory effects, and supports apoptosis [2].

Approximately 30% of the global population is iodine deficient due to reduced consumption and exposure to foods and environmental factors that inhibit iodine absorption. Let’s explore some of the basics about iodine – where we get it, common forms, symptoms of deficiency, and how much we actually need, not only to prevent deficiency, but to optimize tissue levels beyond what is needed to support thyroid function.

The oceans are the world’s main repository of iodine with some deposition in coastal soil due to volatilization of ocean water from ultraviolet radiation. Very little of the earth’s iodine is actually found in soil and the further we are from the coast, the lower the iodine content [3]. Food sources of iodine are seaweed (kombu, nori, kelp, wakame), seafood, iodized salt, dairy, eggs, baked goods made with iodate dough conditioner, breast milk, infant formula, beef liver and chicken [4].

Although iodide and iodine are used interchangeably, they are structurally and functionally different. Iodine and iodide are closely related terms because iodide is derived from iodine; however, iodine is a chemical element whereas iodide is an anion [5].

Iodine Deficiency Disorder (IDD) is the most common endocrinopathy in the world and is also the most preventable. The most recent data suggests that at least one-third of the world’s population is iodine deficient [6]. According to data from the National Health and Nutrition Examination Survey [7], the median urinary iodine concentration of adults in the U.S. decreased by over 50% from the early 1970s to the late 1990s [8]. Decreased consumption of dietary iodine in the U.S. is potentially due to variations in the iodine content of dairy products or avoidance of dairy, the removal of iodate dough conditioners in commercially produced bread, new recommendations for reduced salt intake for blood pressure control, and use of non-iodized salt [8].

Iodine levels are measured in the urine as much of what we consume is eliminated through the kidneys. To determine regional iodine deficiency, the measurement of urinary iodide is done across large populations and does not involve the use of a high loading dose of iodine. The American Thyroid Association defines iodine deficiency as a median urinary iodide concentration less than 100 mcg/L in a nonpregnant population, or <150 mcg/L in pregnant women [9].

Much of the systemic effects of iodine deficiency are the result of deficiency of thyroid hormones [3]. Though many tissues concentrate iodine and all cells of the body utilize iodine, it is the thyroid that gets the lion’s share from dietary sources. Deficiencies are most pronounced within the thyroid gland with extenuating effects on other iodine-concentrating glandular tissues. Common symptoms of iodine deficiency include weight gain, brain fog, psychiatric disorders, reduced intellectual capacity, cancer (breast, stomach, prostate), prostate enlargement, depression, fatigue, goiter, menstrual issues, polycystic ovary syndrome (PCOS), saliva deficiency, thyroid nodules, migraines, miscarriages, and stillbirths [3].

The various forms of iodine that we consume in food or through supplementation is reduced to iodide in the stomach and upper small intestine before absorption. Iodide is actively transported into cells primarily through the sodium-iodide symporter (NIS). In the thyroid, the function of the NIS is regulated by thyroid-stimulating hormone, thyroglobulin, and iodide concentrations. The NIS is also expressed in other tissues that concentrate iodide. These tissues include the tear ducts, salivary glands, choroid plexus, stomach, intestines, lactating breasts, kidneys, placenta, the ovaries, and cells of the immune system [10].

The sodium iodide symporter (NIS) is a plasma membrane protein that facilitates the active transport of iodide into the thyroid gland and various extrathyroidal tissues.

In addition to iodide transport, the NIS can also transport other chemicals that may inhibit iodide absorption and NIS function. Perchlorate is a common environmental chemical that inhibits NIS function and impairs iodide absorption. Perchlorate is pervasive in the environment and our food chain as it is commonly found in fertilizers, rocket fuel, missiles, fireworks, and other explosives, leaving remnants to settle into the soil and groundwater [11].

Nitrates can also inhibit the NIS and though they are commonly found in vegetables, meat, and dairy, higher concentrations are found in fertilizers that saturate the soil and seep into groundwater. The active component of goitrogenic foods is thiocyanate. It is found in high concentrations in uncooked cruciferous vegetables, millet, soy, and sweet potatoes, and is another common inhibitor of the NIS and iodine absorption [11].

Bromine, chlorine, fluorine, and iodine are part of the family of halogens on the periodic table, so they have similar properties. Like iodine, the halogens can exist in their ionic form as bromide, chloride, and fluoride. These halides exist in food, water, medications, and our environment and competitively inhibit the absorption of iodine.

How much iodine do we need?

The Recommended Dietary Allowance (RDA) for iodine is 150 mcg for an adult, 220 mcg during pregnancy and 290 mcg for lactating women with the upper daily limit set at 1100 mcg per day [12]. Iodine deficiency is primarily from lack of iodine consumption, but we are also exposed to components in food and the environment that inhibit the assimilation of iodine into the tissues that need it the most.

Iodine levels are measured in the urine as much of what we consume is eliminated through the kidneys.

The RDA of 150 mcg was proposed decades ago as the amount of iodine needed to prevent goiter. Given the presence of naturally occurring and man-made chemicals in our environment that have the potential to inhibit iodine absorption, our need for iodine may be greater than the RDA. In a 2011 assessment of iodine  consumption in Japan, Zava and Zava determined that the average iodine intake, largely from seaweed, averaged 1000-3000 mcg/day [13].

In comparison to the RDA, residents of Japan who consume a traditional diet, ingest between 7-20 times our RDA and the Japanese Ministry of Health has set the upper limit of iodine at 3000 mcg/day [14]. The increased consumption of iodine may have a significant effect on the lower rates of breast, gastric and prostate cancer in Japan as compared to the U.S.

Food sources with a higher iodine content may be better tolerated than higher levels from supplements as iodine is combined with additional nutrients that support absorption and utilization. Selenium, iron, zinc, copper, magnesium, and vitamin A are all supportive of thyroid function and hormone production. Combining iodine supplementation with these nutrients supports the enzymes needed to make thyroid hormone, reduces oxidative stress, and supports conversion of T4 to T3 [15].

The paradoxical effect of too much iodine

Read any literature on the use of iodine and you will encounter the cautionary tale of the Wolff-Chaikoff effect. This is a real phenomenon, and it occurs when too much iodine enters thyroid tissue and has an inhibitory effect on thyroid hormone production and release. As mentioned above, the NIS is partly regulated by iodine concentration within thyroid cells. Too much iodine decreases the activity of the NIS, leaving the thyroid in a state of reduced activity for anywhere between 2-15 days. Eventually, the thyroid may return to normal function but in those with an underlying thyroid disorder such as subclinical hypothyroidism or Hashimoto’s, the thyroid may not return to normal function and ongoing treatment with thyroid medication may be necessary [13].

Though many tissues concentrate iodine and all cells of the body utilize iodine, it is the thyroid that gets the lion’s share from dietary sources.

High dosages of iodine can also cause hyperthyroidism especially in populations that have been living in a state of iodine deficiency where nodules can form an excessive amount of thyroid hormone from supplemented iodine [14]. It is always important to remember that in high doses, nutrients can have a drug-like effect. Just because a little is good does not mean more is better.

ZRT Laboratory measures iodine through a dried urine sample taken upon waking and before bed. This test does not require a high loading dose of iodine prior to collecting the urine sample and is more representative of daily consumption. The options for testing urine iodine include a standalone Iodine Panel; as part of a Comprehensive Thyroid Profile; or in conjunction with other essential minerals and heavy metals, in either the Urine Toxic & Essential Elements or the Comprehensive Toxic & Essential Elements.

To further our understanding of the many benefits of adequate iodine, I will be looking into the role that iodine plays in extrathyroidal tissues as well as a closer look at thyroid function and iodine status. If IDD is the most common endocrinopathy, what are the effects of iodine deficiency on fertility, PCOS, skin disorders, immune function, fibrocystic breasts, and breast, prostate, and other cancers? Stay tuned…