Curious About Iodine, Part 2: Beyond the Thyroid 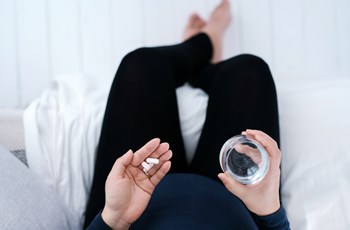 The role that iodine plays in the thyroid is well established. We need iodine to make thyroid hormones, and the numeric designation in T3 and T4 represents the number of iodine molecules attached to the amino acid tyrosine. In part one of this series on iodine, I examined the versatility of this unique element and its uses throughout history and explored the sources and forms of iodine found in foods and supplements. In part two of this series, I take a closer look at the role that iodine plays in the thyroid and in various extrathyroidal tissues where it supports breast health, ovarian function, fertility and the normal development of the brain and nervous system in the fetus and newborn.

In addition to the thyroid, other tissues that store iodine are the breasts, ovaries, prostate, uterus, placenta, thymus, salivary glands, lacrimal glands, eyes, skin, gastric mucosa, choroid plexus, renal cortex, pancreas, liver, small and large intestinal mucosa, nasopharynx, and the adrenal cortex (2). While the thyroid tends to concentrate a higher percentage of iodide (I¯), extrathyroidal tissues tend to utilize a greater percentage of molecular iodine (I₂), which exerts multiple and complex actions related to its role as an antioxidant, an anti-inflammatory, a pro-inflammatory, an inducer of apoptosis, an immune modulator, and a promotor of cell differentiation (3). 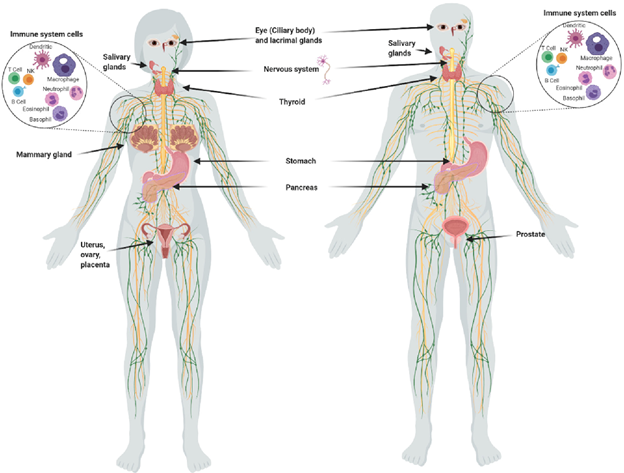 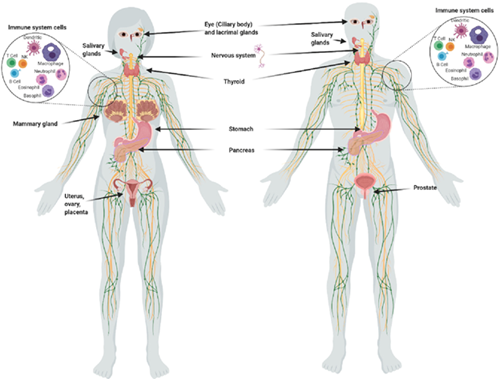 A closer look at iodine and the thyroid

Iodine is necessary for the normal development of breast tissue and suppresses breast cancer cell and tumor growth.

T4 can be converted to triiodothyronine (T3) in the peripheral tissues of the liver, kidneys, and muscles. The conversion of T4 to T3 via deiodinase enzymes, releases one molecule of iodine that can be salvaged and redistributed to an intracellular iodine pool (4). If peripheral conversion of T4 to T3 is weak, this may result in lower levels of iodine available to extrathyroidal tissues. The overall effect of reduced iodine from T4 to T3 conversion can be compounded by deficient iodine consumption.

The thyroid gland and extrathyroidal tissues use iodide transporters as a gatekeeper for iodide tissue concentrations. If the tissue level of iodide is low, there is an increased expression of iodide transporters. Thyroid hormone levels may be well within the normal range because the thyroid receives a greater percentage of dietary iodine even when extrathyroidal tissues are deficient. Therefore, we cannot rely on thyroid markers for a complete assessment of iodine status especially under the current Recommended Dietary Allowance of 150 mcg/day, which was established with the singular goal of preventing goiter. Under these recommendations, it is possible that extrathyroidal tissues may bear the consequences of suboptimal iodine levels (5).

Breast tissue stores iodine especially during lactation in which the mammary glands concentrate iodine and secrete it into breast milk to provide this essential nutrient to the newborn (6). Iodine deficiency has been associated with fibrocystic breast disease and, more recently, with the development of distant metastatic breast cancer in young women aged 25-39. This trend toward the development of breast cancer in younger women has been associated with the reemergence of iodine deficiency in the U.S. since the 1970s (7).

Iodine is necessary for the normal development of breast tissue and suppresses breast cancer cell and tumor growth. In an article dating back to March of 2000, the Journal of Clinical Endocrinology and Metabolism referenced a research study proving that molecular iodine (I2) rather than iodide (I−) when administered together with the carcinogen dimethylbenzanthracene resulted in a significant reduction in the incidence and size of multiple mammary tumors after the cancer developed. It was also reported that a higher tumor iodine content together with a significantly reduced tumor size were evident in rats treated with medroxyprogesterone acetate and iodine than in those treated with medroxyprogesterone acetate alone, suggesting that the active uptake of iodine had a suppressive effect on tumor growth (8).

The hormonal environment that supports the development of fibrocystic breast disease may also be associated with an increased risk of developing breast cancer in some women. Studies in rats have shown that iodine deficiency can result in hyperresponsiveness to estradiol, which increases alveolar cell proliferation in breast tissue (7). Both fibrocystic breast disease and breast cancer have been associated with iodine deficiency, and both have the potential to respond well to iodine therapy by improving estrogen metabolism via the cytochrome P450 enzyme pathways that direct estradiol down the 2-hydroxyestradiol pathway, which has antiproliferative effects (9).

Iodine and the ovaries

Of the tissues that utilize iodine, the ovaries have one of the highest concentrations in the body.

Of the tissues that utilize iodine, the ovaries have one of the highest concentrations in the body. Iodine is an essential micronutrient for normal reproductive function and deficiency is associated with reduced fertility. In an observational study conducted between 2005 and 2009 by the National Institute of Child and Human Development, 467 women trying to conceive were examined for iodine status. It was discovered that 44.3% were considered iodine deficient as determined by a urinary iodide concentration less than 50 mcg/g. Compared with women of normal urinary iodide concentration (>100 mcg/g), those with low iodine were 46% less likely to achieve pregnancy during each menstrual cycle (10, 11).

The exact role of iodine and fertility has not been fully elucidated but it is suspected that iodine is necessary for the process of ovulation as small and growing follicles take up iodine to support secretory activities. When iodine deficiency was artificially created in cows, the cows experienced anovulatory cycles (12). If iodine is used to support fertility, the effects of supplementation may also have a positive effect on thyroid function, which has a regulating effect on ovulation as well.

Polycystic ovary syndrome (PCOS) is one of the most common hormonal disorders in women of childbearing age who experience anovulatory cycles and the formation of ovarian cysts. Iodine deficiency negatively impacts folliculogenesis and the maturation of the ovarian follicle. If a follicle does not mature, ovulation cannot occur. The immature follicle can evolve into a fluid-filled cyst within the ovary that causes pain and discomfort (13). An increase in androgen production may also occur, resulting from the continuous stimulation of the follicles by luteinizing hormone. If iodine deficiency can lead to anovulatory cycles, the use of iodine for PCOS may be an essential nutrient in the treatment of this common disorder to support normal ovarian function.

Iodine and the endometrium

It was also noted that there is an increased demand for T4 production during pregnancy as it is needed by the fetus in the first trimester and beyond to make fetal thyroid hormones. Reduced thyroid hormones during pregnancy can result in fetal neurological damage, congenital hypothyroidism, miscarriages, and reproductive failures. Bilal et al propose that although iodine in the form of thyroid hormones is essential, iodides (I¯) and molecular iodine (I₂) also play a role in optimizing reproductive organs and pregnancy outcomes by preventing localized iodine deficiency (5).

Brain development in the growing fetus and newborns

Adequate iodine intake during the first few weeks of gestation is essential for neurocognitive development in the growing fetus.

Iodine is necessary for normal brain and nervous system myelination both in utero and during the early postpartum period (6). Iodine deficiency continues to be the most common cause of preventable intellectual underdevelopment worldwide. The most vulnerable groups are pregnant and lactating women and their developing fetuses and newborns. Adequate iodine intake during the first few weeks of gestation is essential for neurocognitive development in the growing fetus (14). Iodine supplementation should begin during preconception and no later than 4-6 weeks gestation. NHANES data from 2007–2014 indicate that iodine status among pregnant women is insufficient. Another analysis showed that although approximately 75% of pregnant women took a prenatal supplement in 2011–2014, only 18% of the supplements contained iodine (15).

Making the distinction between iodide (I¯) and molecular iodine (I₂) is important as they have differing functions dependent upon the tissues in which they concentrate. Iodide is primarily used by the thyroid gland to make thyroid hormone and while extrathyroidal tissues also use iodide, molecular iodine tends to have a greater role as an antioxidant, cell differentiator and immunomodulator. The capture of I₂ in the thyroid is 40% lower than in extrathyroidal tissues and under conditions of iodine deficiency, I¯ is more efficient than I₂ at restoring the goitrous thyroid to normal function. Dose-response studies in humans have demonstrated that I₂ at concentrations of 1 to 6 mg per day had significant beneficial effects on fibrocystic breast disease, prostatic hyperplasia and polycystic ovaries (3). While the uptake of iodide is dependent on transporter systems that seem to function as a gatekeeper in the thyroid and extrathyroidal tissues, the uptake of I₂ appears to occur through a facilitated diffusion system, which may be a conserved evolutionary system similar to what occurs in marine algae where much of the earth’s iodine is concentrated (9).

Recommendations for daily iodine dosing can be very controversial, ranging from 150 mcg/day up to 100 mg/day. Though much of the high dose iodine may flush out through the kidneys, the effects can uncover latent thyroid disease. Based on an assessment of iodine consumption through food sources in Japan by Zava and Zava, more reasonable dosing may fall into the range of 1-3 mg/day to support both thyroid function and the needs of extrathyroidal tissues (16). Using a supplement that contains both iodide and molecular iodine may have the benefit of supporting the thyroid with iodide while also supporting extrathyroidal tissues with molecular iodine. Assuring a good complement of other nutrients needed for iodine utilization and thyroid hormone function (selenium, iron, zinc, copper, magnesium and vitamin A) would also help to reduce potential negative effects of extra iodine and potentially optimize the supportive effects that iodine can provide.

In part three of the iodine series, we will look at the benefits of iodine for immune function, its role as an antioxidant and the potential of iodine as an anti-cancer agent.