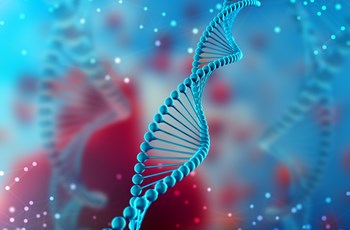 Single nucleotide variations (SNVs – formerly single nucleotide polymorphisms, SNPs) are the most common genetic variations in individuals. Research shows that some SNVs can help predict an individual’s risk of developing certain diseases, such as breast cancer. Although future studies are necessary to further characterize the involvement of SNVs in the etiology of breast cancer, this blog will review up to date literature of what science has discovered so far regarding SNVs within the steroid metabolism pathway and their relationship to breast cancer.

First things first – a crash course in genetics. To make an enzyme, just as for any other protein, you must first start with a specific region on the DNA molecule. DNA is comprised of nucleotides – adenine, guanine, thymine, or cytosine – that come together on both strands, forming a tightly wound double helix. The precise location of these nucleotides is very important – their sequence determines the final structure of a given protein. It takes three nucleotides to provide the necessary code to translate into one amino acid. And if one of these nucleotides is replaced by another, a completely different amino acid can form, potentially compromising the function of the protein. This is what an SNV is – a change of one nucleotide in the DNA molecule at one specific location. 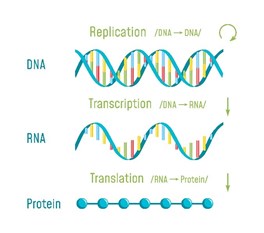 SNVs are common and occur about once every 1,000 nucleotides, meaning that any one person can have up to 5 million SNVs in their genome. To classify as a SNV, the variant (i.e., the new, changed version of the three-nucleotide sequence) must be detectable in >1% of a population [1]. SNVs can occur in any area of the DNA, including regions that are non-coding (introns), coding (exons), or intergenic (between genes). A single SNV can either result in no change to the DNA coding sequence, change the resulting amino acid to a different amino acid, or affect gene splicing, binding of transcription factors, or gene expression. As you might imagine, the possibilities are endless regarding SNVs and how they can affect an individual at the molecular level and play a role in health and disease processes.

To date, there have been numerous studies to determine if there are specific SNVs that can be associated with increased breast cancer risk. It has long been known that inappropriate estrogen metabolism resulting in high levels of catechol estrogens is considered a risk factor for susceptibility to breast cancer [2][3].  Therefore, some of the research reviewed here will discuss SNVs in the enzymes within the sex steroid hormone pathway and how these may affect the levels of parent estrogens and their metabolites. In reviewing the studies that have been published, we can quickly become confused with the information that is available, most of which tends to be subsequently contradicted or only applicable to certain populations. Breast cancer is a complicated disease, so we shouldn’t expect the answer to be simple. 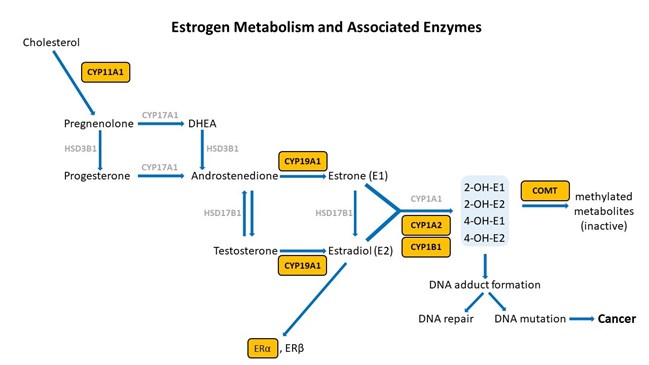 There are certain key steps in the estrogen metabolism pathway where things can go awry. First, cytochrome P450 (CYP) enzymes are involved in the formation and breakdown of various molecules and chemicals, including the synthesis of steroid hormones. CYP11A1, the cholesterol side-chain cleavage enzyme, catalyzes the conversion of cholesterol to pregnenolone which is the initial and rate-limiting step of steroid hormone production. So, right from the start of the steroid formation process, the system can get derailed. To date, there are multiple SNVs associated with CYP11A1 that, when combined, show a cumulative effect on increased breast cancer risk in certain populations [4], but researchers have yet to elucidate the mechanism. These SNVs might affect functionality of CYP11A1 to result in an increased risk of cancer.

Aromatase (CYP19A1) is very well-studied for its important role in the formation of estrogens from androgens. In breast cancer, aromatase inhibitors are commonly used as therapeutic targets to block estrogen formation. Variants in this gene can lead to increased enzyme activity and therefore contribute to increased levels of circulating estrogens. One risk-associated SNV is located upstream of CYP19A1 and purportedly results in modified aromatase activity [5]. Another variant affects the structure and function of the enzyme [4]. Yet another is associated with an increased estrone/androstenedione ratio [6]. Interestingly, a fourth variant has an association with improved treatment outcomes and increased time to disease progression [7][8]. The A allele of rs4646, which is positively associated with longer overall survival, is thought to be the result of having lower levels of aromatase, which enables greater suppression of aromatase activity by aromatase inhibitor therapy [7][8].

The estrogen receptor (ERα) is a ligand-activated nuclear receptor and transcription factor; what this means is that upon binding to estradiol, ERα can go on to activate or repress the expression of numerous genes. Other ligands that bind and activate transcription via ERα include endogenous estrogens (estrone and estriol), natural estrogens, synthetic estrogens, and phytoestrogens [9]. Since ERα plays such a major role in hormone response as well as in breast cell growth and differentiation, it has been a focus in breast cancer prevention and treatment. There have been many SNVs identified in the ERα gene that have positive effects on breast cancer risk; however, this may be a population-specific trend [5].

Estrone and estradiol are metabolized by three competitive pathways involving irreversible hydroxylation, catalyzed by the CYP enzymes: CYP1A1, CYP1A2, and CYP1B1. This is an important junction as the hydroxylated estrogens (aka catechol estrogens) have the potential to be cancer-causing due to their ability to cause DNA damage via the formation of superoxide radicals and DNA-damaging adducts [2]. Hydroxylated estradiol (4-OH-E2) is particularly carcinogenic because of its highly reactive nature; catechols are generally very reactive, and this particular catechol can bind and hold on very tightly to DNA.

Methylation by the Catechol-O-Methyltransferase (COMT) enzyme adds a protective methyl group to the reactive hydroxyl, thus inactivating these potentially dangerous metabolites [10]. Variations in COMT can predispose an individual to methylate less effectively, potentially leaving them vulnerable to the ravaging effects of oxidative stress brought on by free radical formation.

A 2011 case-control study of 530 post-menopausal women with breast cancer found that the combined effects of SNVs in CYP1B1, COMT, and a third enzyme MnSOD, increased susceptibility to breast cancer incidence [11]. MnSOD is a mitochondrial enzyme that catalyzes the conversion of superoxide anion into hydrogen peroxide and molecular oxygen, which protects cells from damage by free radicals resulting from estrogen metabolism. The variant discussed in the above-mentioned study in MnSOD can affect the localization and transport of the enzyme into the mitochondria, thereby reducing its efficacy in combating free radical damage, thus rendering someone more susceptible to the harms of oxidation. Interestingly, concurrent presence of the CYP1B1 + COMT or COMT + MnSOD SNVs, respectively, each represented a 2-fold increased risk of breast cancer. When all three of the at-risk SNVs were combined, women were at a 12.2-fold increased risk of breast cancer [2]. The CYP1B1 variant displays a higher enzyme activity, which would putatively result in increased catechol estrogens, while the COMT variant is thought to produce an enzyme with reduced functionality, thereby potentially limiting the ability to methylate and inactivate the catechol estrogens. It is not surprising that, taken together, these three variants cause significant impairment in the final steps of estrogen metabolism.

Methylation is generally considered to be protective; methylation of the catechol estrogens marks them for safe elimination from the body. This is an important mechanism to prevent the further conversion of the catechol estrogens to even more reactive quinone estrogens. The ability to properly methylate can be evaluated by measuring and assessing the ratio of catechol estrogens, 2 and 4-hydroxy-estradiol, to their methylated counterparts, 2 and 4-methoxy-estradiol. If testing reveals that there are low levels of estradiol, estrone, and estriol, one would also expect the levels of methylated estrogens to be low. However, if the catechol estrogen levels are elevated and at the same time the methylated estrogens are low, this could indicate an inability to effectively methylate. This methylation impairment can potentially result from genetic variants in COMT which decrease enzyme activity.  Determining the levels of estrogen metabolites in urine provides a comprehensive picture regarding methylation ability and potential increased risk of breast cancer [13][12]. ZRT’s Advanced Metabolites test is the only test that measures the levels of the 2 and 4-hydroxy and the 2 and 4-methoxy estrogen metabolites in urine for the most complete analysis.

All hope is not lost though; genetics are only one piece of the puzzle, as there are lifestyle and diet changes that can be implemented to help decrease the risk of breast cancer. Nutritional intervention with foods rich in DIM or indole-3-carbinol helps shift metabolism to the safer 2-hydroxylation pathway [14]. Also, methylation can be supported with supplements such as vitamin B12, folic acid, or SAM-e [15]. Cruciferous vegetables like arugula, broccoli, cabbage and kale as well as beets, berries, and beans are important in a diet aiming to maximize methylation [16]. Let’s not forget that lifestyle habits including reducing stress, getting enough sleep and recovery, and routine exercise, are also important for everyone to mitigate disease risk and live a healthy, long life [17].

9. Zava, D et al. “Estrogenic and antiproliferative properties of genistein and other flavonoids in human breast cancer cells in vitro”,Nutrition and Cancer 1997;27:31-40.

12. Lee JR, Zava D, Hopkins V. “What your doctor may not tell you about breast cancer. How hormone balance may save your life” Warner Books, Inc., New York, NY, 2002. Chapter 6.