Haunted by Spooky Things in Your Candy? 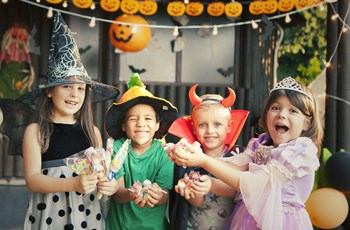 It’s that time of year when my favorite sinkhole that is Pinterest overflows with HALLOWEEN EVERYTHING! Lines between reality and mystical foggy autumn things get blurry – spooky treats, homemade costumes, pranks to scare your friends, the perfect eerie soundtracks – all helpful suggestions for your ghastly transition from the normal human self into that monstrous creepy being. And I love ALL OF IT! My house is covered with a 2-story sized spider web with a giant furry tarantula right smack in the middle of it. Outdoor lights have been swapped for ominous reddish-orange ones, casting a macabre glow on various tombstones and protruding skeleton bones scattered in the yard. There is a witch hanging on my front door, making a cackling sound every time someone walks by – annoying? Perhaps. But very effective!

My feral monstrosity of a sweet tooth is just beginning to come out of a year-long hibernation, enticed by the allure of everything sweet and colorful. Let’s face it, Halloween candy is a staple that is hard to resist. Since becoming a parent, however, I’ve become more cognizant about exactly how much candy my family eats, partly because candy can make parenting that much harder. I’ve literally watched my children go from acting like unhinged lunatics, wild-eyed, sniffing out more candy that I’ve put away like truffle-seeking pigs; to the tearful crash that often follows – the epic post-Halloween candy binge hangovers are real! And they’re not fun for anyone involved.

What’s Hiding in Your Kids' Candy?

More than 10,000 chemicals are allowed as additives in food (including candy) in the United States.

As a parent and a researcher, I approach candy with caution – not necessarily because of the legendary sugar highs and lows, or being annoyed over empty calories, or thinking of cavities developing in real-time, or sweets-induced bellyache – but primarily because of all the other ingredients in it. More than 10,000 chemicals are allowed as additives in food (including candy) in the United States [1]. Some of them, such as synthetic artificial food colors (AFCs) are added to foods for aesthetic reasons to make food more colorful and thus particularly appealing to young children. Originally derived from coal tar and now from petroleum, AFCs are easily identifiable at the end of the ingredients list by a color name and a number. In the last 6 decades, their use has increased more than fivefold [2]. Over the years, many AFCs have been banned because of their adverse effects on laboratory animals, and research is just beginning to address how these impact human health [3].

So What’s the Big Deal?

Diet quality plays a very important role in mood and neurological health, especially in children [4,5]. Specifically, diet low in healthy foods and/or high in unhealthy foods may increase a child’s risk for developing mental health problems later in life [5]; and can be particular triggering for those who carry a genetic lability for Attention Deficit Hyperactivity Disorder (ADHD) [6].

Children with ADHD appear to be more sensitive to the nutrient composition in their food with regard to symptom presentation compared to their non-ADHD peers [6,7]. The reason for this is not clear; however, the authors speculate that perhaps it is the inappropriate absorption and utilization of micronutrients in ADHD, rather than low dietary intake, that’s to blame.

A number of recent studies show that supplementation with micronutrients, such as vitamins and minerals, can be an effective way to manage symptoms of hyperactivity, inattention, and aggression [8,9]. In fact, some of these broad-spectrum nutrient interventions are now in clinical trials.

Experts suggest that AFCs may play a role in hyperactivity, especially for some children with ADHD [3]. Double-blind placebo-controlled studies confirm that artificial dyes can contribute to hyperactivity [10,11]. The mechanism of exactly how AFCs contribute to hyperactivity are not known; however, some of them do cross the blood-brain barrier. Elimination of AFCs from the diet may provide benefits to children with ADHD, who seem to be particularly sensitive to certain dyes [12].

It’s a good idea to arm yourself against the annual assault by developing a Halloween-candy strategy to carry you through the next few weeks. In the same vein, I promise you – I am not that kind of parent who wants to ruin all the fun, and I certainly don’t advocate for ditching candy altogether by confiscating your child’s jubilantly collected loot. However, Halloween for someone with ADHD may be a recipe for trouble; so here’s how not to ruin your child’s Halloween: