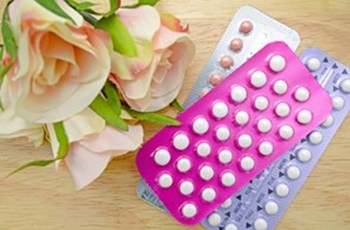 Interpretation of hormone testing using saliva, dried blood spot, or serum can be tricky when women are using oral, patch, or other hormonal contraception methods.

Birth control pills, patches, and vaginal rings contain a combination of synthetic estrogen-like and progesterone-like substances, usually ethinyl estradiol and a variety of progestins respectively. A progestin-only formula for contraception is available as a pill, injection, IUD or a subdermal implant. The mechanism of action for these hormone analogs is to suppress the pituitary’s production of follicle stimulating hormone (FSH) and luteinizing hormone (LH). FSH stimulates the process of ovarian egg maturation and the LH surge triggers the mid-cycle ovulation. Suppression of these hormones prevents the ovarian development and release of an egg.

In patients using hormonal contraception, therefore, ZRT hormone testing assesses the amount of hormone the body is producing endogenously in its suppressed state. Since ovarian function is blocked, the body’s production of estradiol and progesterone will usually be low. ZRT Laboratory has established ranges for measuring estradiol and progesterone levels when women are using hormone contraceptives. In addition, testosterone levels can also decrease because ethinyl estradiol raises levels of sex hormone binding globulin (SHBG), which ties up free testosterone.

What are the treatment implications if test results are low?

Although hormone testing when a woman is using a hormonal contraceptive shows low results, it should not be assumed there is a low hormone activity at the tissue level. Ethinyl estradiol and progestins do have an effect on cell receptors. Because of this effect, results may not be helpful when deciding on treatment: supplementation of any additional hormones is not usually warranted and should be considered cautiously due to risk of complications. This is because symptoms experienced are not likely to be a consequence of the deceptively low hormone levels. More commonly, a woman will experience side effects related to the tissue action of the non-bioidentical hormones. Giving bioidentical hormones to replace the artificially low results can lead to further hormonal imbalance and can increase adverse effects due to excessive hormonal influence at the tissue level. This is particularly important in considering estrogen replacement which can potentially increase risk of blood clots and/or stroke.

When should the sample be collected?

If the decision is made to test saliva or blood spot while using synthetic hormones, the sample can be collected at any time during the cycle, except during the "period." While ZRT doesn't recommend discontinuing hormonal contraceptives just for the purpose of testing, if cessation is determined for clinical reasons, the appropriate protocol for testing through ZRT is as follows:

With the withdrawal of some contraception methods or in perimenopausal women, this protocol may need to be adjusted due to shortened or lengthened cycles or irregular bleeding. ZRT Customer Service Representatives can provide further information if the situation doesn't seem to fit the protocol.