Phosphatidylserine – Protection from the Effects of Chronic Stress 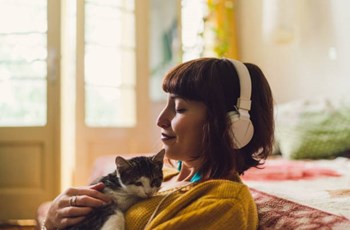 If one were to create a word cloud of our clinical consulting calls in 2020, the word “phosphatidylserine” would likely float to the center in a large, bold, brightly colored font. After a year spent coping with a global pandemic, record high unemployment, social distancing, and remote learning for students, accompanied by not only an extreme wildfire season but also a contentious presidential election in the U.S., people are stressed – and it shows.

At ZRT we are seeing plenty of patients with abnormal salivary cortisol profiles, absent, blunted or exaggerated cortisol awakening responses, and symptoms typical of both high and low cortisol.

At times (looking at you, 2020…) stressors may exceed our coping strategies, and it may be harder than usual to implement our ideal lifestyle changes.

When we talk with practitioners about managing cortisol, we of course emphasize lifestyle interventions such as stress management, relaxation practices, social supports, optimal nutrition and meal timing to keep blood sugar stable, healthy bedtime routines and adequate sleep. Under normal circumstances, these may be adequate to help many patients reestablish a normal cortisol level and circadian rhythm.

At other times (looking at you, 2020…) stressors may exceed our coping strategies, and it may be harder than usual to implement our ideal lifestyle changes. Once established, some symptoms of high cortisol can become self-perpetuating, including sleep disruption and abdominal weight gain. Poor sleep raises cortisol, and high cortisol disrupts sleep. Cortisol leads to abdominal weight gain, and that very same abdominal fat inactivates cortisol to cortisone, to reactivate later within the tissue, leading to more weight gain. Eventually chronically high cortisol leads to receptor downregulation within the Hypothalamic-Pituitary-Adrenal (HPA) axis, so that less cortisol is made in response to the body’s demands, and people begin to feel fatigued or “burned out”; yet at bedtime, the worries and overwhelm kick in, and cortisol remains higher than it would normally be during sleep, when it should be at its lowest point in the 24-hour cycle.

We call this the “wired and tired” phase of adrenal dysfunction, and this is when we may reach for phosphatidylserine (PS) to help break this cycle. PS may help blunt the highest cortisol peaks during prolonged stress and reduce elevated cortisol levels at bedtime to allow adequate restorative sleep.

Phosphatidylserine is a glycerophospholipid, an important component of cell membranes that is particularly abundant in the brain and nervous system. PS ensures nerve cell membrane fluidity – so important to its structure, and therefore function – and plays an integral role in neurotransmitter metabolism, nerve signal transmission and effective glucose utilization by the brain.

Phosphatidylserine has been studied since the early 1990s for its ability to promote a healthy endocrine response to an acute stressor, blunting serum ACTH and cortisol elevations in response to either emotional stress [1] or physiological stress induced by exercise [2]. In the fitness world, PS is appreciated for supporting exercise tolerance and reducing exercise-induced physiological stress. PS is thought to promote a desirable hormonal status for athletes by blunting increases in cortisol levels, effectively lowering the cortisol/testosterone ratio to support tissue repair and lean muscle building [3].

Chronic PS supplementation has been found to promote a less stressed, more relaxed state and a subjective improvement in mood [4,5]. Some studies have combined PS with other nutritional supports, namely phosphatidic acid or omega-3 fatty acids, to good effect [6,7]. In one of these, omega-3 administered in combination with PS were found to have stress-reducing effects exclusively in highly chronically stressed adult males who showed a blunted cortisol response to the Trier Social Stress Test (TSST), the gold standard for evaluating the neurobiology of acute stress.

Chronic phosphatidylserine supplementation has been found to promote a less stressed, more relaxed state and a subjective improvement in mood.

If you’re curious like I was as to how researchers ethically and reliably provoke a predictable stress response in human subjects, the answer is: they administer a public speaking task in front of a non-responsive audience, with a surprise mental math challenge thrown in – a scenario that may sound all too familiar to some of today’s online instructors and learners. In the study’s lowest responders, treatment with omega-3 plus PS for 12 weeks seemed to restore the cortisol response to this challenge, and the researchers concluded that those with high chronic stress and/or a dysfunctional response of the HPA axis may benefit from omega-3 plus PS supplementation [6].

Initial research may have focused on men because they generally have a higher HPA axis response to the TSST [8]. But what about women? As a matter of fact, the cortisol-lowering effect of PS was also observed in a recent study of 40 women aged 18-45 years with a diagnosis of PMS [9]. After a baseline cycle, they were assigned to take either PAS (containing 400 mg PS and 400 mg PA per day) or a placebo over the course of 3 menstrual cycles. PMS symptoms as assessed by the DRSP total score showed significantly better improvement with PAS intake as compared to placebo. PAS-treated women also reported a greater improvement in physical and depressive symptoms, less reduction in productivity and less interference with relationships compared to the placebo group.

In addition, the salivary cortisol percentage increase of the CAR was significantly less pronounced in the follicular phase of cycle 4 than in that of cycle 1 for subjects taking PAS. Serum cortisol levels of PAS-treated females slightly decreased between visit 1 and visit 5, while cortisol levels in the placebo group increased. This study provided further confirmation that a daily intake of PAS, containing 400 mg PS and 400 mg PA, can be considered as safe [9].

In addition to its effects on cortisol, PS is also one of the most well-researched ingredients for cognitive support and has been shown to support attention, memory, learning and mental flexibility. Since 2003, PS has been granted a qualified health claim by the FDA, related to cognitive dysfunction and dementia in the elderly. This status allows labels to state "consumption of phosphatidylserine may reduce the risk of dementia and cognitive dysfunction in the elderly," but it must appear along with the disclaimer "very limited and preliminary scientific research suggests that phosphatidylserine may reduce the risk of cognitive dysfunction in the elderly. FDA concludes that there is little scientific evidence supporting this claim."

Phosphatidylserine is also one of the most well-researched ingredients for cognitive support and has been shown to support attention, memory, learning and mental flexibility.

A 2010 study in elderly Japanese subjects found that memory scores in PS treated groups were significantly increased, but only in subjects with low scores at baseline. This study specifically detected improvements in delayed verbal recall - a memory ability that begins to decline in the earliest stage of dementia [10]. As memory and cognitive function tend to be compromised in a setting of chronic stress and sleep deprivation, it’s a nice additional benefit to be aware of.

Doses of PS used in the above-mentioned studies have varied from 200 to 800 mg per day. Historically, PS was derived from bovine brain tissue, but that fell out of favor for obvious reasons related to prion disease transmission. These days, most PS supplements are derived from soy or sunflower lecithin or from cabbage.

In order to make the most appropriate recommendations for patients with suspected adrenal dysfunction, it is helpful to first assess cortisol diurnal rhythm. This can be done accurately and non-invasively by testing saliva and/or urine cortisol levels. ZRT Laboratory offers an Adrenal Stress profile that includes salivary cortisol upon waking, at noon, evening and at night before bed. CAR reveals a more detailed assessment of adrenal hormone and HPA axis dysfunction by measuring salivary cortisol upon awakening and at 2 additional timepoints in the first hour of the morning, followed by noon, evening, and night. ZRT’s Urine Metabolites Adrenal Profile provides insight into overnight levels of cortisol, cortisol excretion, and conversion to cortisone; this test is especially useful as a second step of testing patients with adrenal dysregulation symptoms whose salivary cortisol levels are normal.