Testosterone Deficiency in Younger Men – Is It Real? 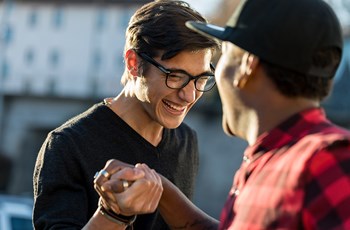 Low testosterone in older men, often referred to as “male menopause” or even “andropause” is fairly well known — and testosterone replacement therapy in this age group has not been without its share of controversy, particularly with respect to heart health. Proper testing and dosing are all-important, as well as understanding a man’s physiology and all the factors that affect testosterone levels. For example, when giving testosterone transdermally it is critical to use testing methods such as dried blood spot or saliva to properly assess absorption of testosterone into the body, avoiding the problem of overdosing to achieve “normal” serum levels.

The investigators who wrote the article, published in Scientific Reports [1], analyzed publicly available data from the CDC’s National Health and Nutrition Examination Survey (NHANES). Of the men older than 20 who participated in NHANES, 2161 had the complete information required for this study, including a serum total testosterone measurement, information on chronic diseases including cardiometabolic risk factors, and handgrip strength measurements.

Total testosterone (TT) deficiency, defined as a serum level <300 ng/dL, was seen in:

Why the Difference with Published Reference Ranges for Young Men?

Harmonized, age-specific reference ranges for TT were recently published to help with diagnosis of hypogonadism and were based on 4 cohort studies in the US and Europe [2]. The 5th-95th percentile range for TT in healthy, non-obese men aged 19-39 was 303-852 ng/dL. However, TT values in the same age group in the NHANES cohort were substantially lower; the 5th percentile of this cohort had a TT of only 182 ng/dL. All testosterone measurements in the cohort studies and the NHANES cohort were by mass spectrometry (LC-MS/MS in the NHANES, the Framingham Heart Study cohort, and the Sibling Study of Osteoporosis epidemiologic study; and GC-MS/MS in the European Male Aging Study and the Osteoporotic Fractures in Men study).

Notably, the average BMI in the younger men (aged 20-39.9 years) in the NHANES study [1] was 27.95 kg/m2, and the prevalence of obesity (defined as a BMI > 30 kg/m2) was 29.8% in this group. Therefore, the authors of the NHANES-based study argue, using only healthy, non-obese men for the harmonized reference range is not really representative of the current demographics in the US, where obesity is now prevalent even in younger age groups.

Is it surprising that a group of men with an average BMI of 27.95, already in the “overweight” category (BMI between >25 up to 30), of whom almost 30% are technically obese, shows a high prevalence of TT deficiency — as well as a high prevalence of the same chronic diseases that are linked to obesity? The diseases that were significantly more prevalent in the men in the young age group with TT deficiency were: abdominal obesity, diabetes, cardiovascular disease, hypertension, clinical depression, low HDL cholesterol, and high triglycerides. Shouldn’t we also note that some of the drugs used to treat these conditions are known to lower testosterone levels in men, including statins, some antidepressants, and anti-hypertensives? The study authors state in their paper that the cross-sectional design of NHANES meant that it was not possible to tell whether low T caused the higher incidence of chronic diseases or whether the poor health of the men itself caused the decline in T levels, and that they were also not able to tell if medication use by the men influenced the results.

Abdominal obesity, often referred to as “central adiposity,” is known to be a strong cardiometabolic risk factor that is linked with the development of chronic diseases like insulin resistance, metabolic syndrome, and ultimately diabetes.

Where does testosterone come in? Large, population-based longitudinal studies have found that men with low T and low sex hormone binding globulin (SHBG) who do not yet have metabolic syndrome or diabetes are significantly more likely to go on to develop insulin resistance or diabetes [3][4]. SHBG is the main binding protein for testosterone in the circulation and largely controls the availability of free testosterone to tissues, and it also affects the total amount of circulating testosterone – the more SHBG, the greater the amount of total testosterone being carried around in the circulation, and vice versa. Obesity is known to decrease SHBG levels while aging increases them, but the effect of obesity in driving down SHBG is greater than the effect of aging in raising it, with consequent effects on total testosterone measurements [5].

Low SHBG has also been identified as a surrogate marker for insulin resistance because of its strong negative association with fasting insulin levels. Studies have indicated that the suppression of hepatic SHBG production in insulin resistance is mediated through monosaccharide-induced lipogenesis, which in turn reduces levels of a hepatic transcription factor that controls the SHBG promoter [6][7]. So young men who are showing a tendency towards insulin resistance will have low SHBG and consequently low TT.

What Could Influence Total Testosterone in the Younger Men with Multimorbidities?

A number of mechanisms have been proposed to explain low TT levels in men with central adiposity and/or insulin resistance:

2) aromatase present in adipose tissue uses up testosterone as it converts to estradiol, which then further shuts down testosterone production in the Leydig cells through negative feedback on the hypothalamic-pituitary-gonadal system;

What about men who exhibit low TT before developing central adiposity or insulin resistance? If they have a sedentary lifestyle or a habitual high refined carbohydrate intake, this can impact SHBG production directly through hepatic monosaccharide exposure, predisposing them to both low TT and risk of obesity.

Can Lifestyle Modification Be the Key to Increasing Total Testosterone?

What about the effects of stress on young men today as they pursue their careers and raise young families? Chronic elevations in cortisol levels as a result of persistent stress prolong the metabolic changes that are normally supposed to be a short-term response to a stress stimulus, and these changes can lead to visceral (central) adiposity and insulin resistance, lowering SHBG and TT levels.

Before young men start rushing off to their doctors and demanding testosterone replacement therapy in the hopes that it will reverse their chronic health conditions, they would be wise to take a look at their lifestyles and see if they can modify some of their own risk factors. Losing some weight, getting more exercise, getting a handle on chronic stress, and eating a healthier diet are all great ways to start. But also addressing health conditions like depression and hypertension by non-pharmacological means, with the support of an integrative health physician, would help avoid using the drugs that can lower testosterone. Not only will more natural interventions help improve their overall health, but any resulting increase in their own testosterone production will also improve vitality and energy.

Younger men can take a leaf from the book of older men who are already looking for natural ways to improve their hormone balance – it’s never too early to start!

[5] Cooper LA, et al. The association of obesity with sex hormone-binding globulin is stronger than the association with ageing--implications for the interpretation of total testosterone measurements. Clin Endocrinol (Oxf). 2015;83:828-33.