Understanding a Broken Heart – The Physiology of Grief 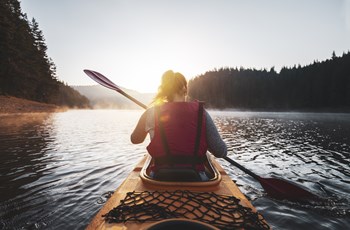 Last weekend I went whitewater rafting. A particularly turbulent patch of the rapids caught me off guard, when I tumbled off the raft into the water. It all happened so quickly. We hit a big rock, the raft turned vertical and I fell into the river. I was swept under and spat back out, my body tossed around like a tiny paper boat. I was gasping for air with the whitewater waves rising in front of me, crashing over my face, flooding my nose, my mouth, choking me. All I could hear was water rushing past me – stubborn, relentless, ferocious. And loud. So deafeningly loud. Breathe, I told myself, breathe the tiny breaths in between the waves, feet forward, lean back, trust the lifejacket. Helpless, I surrendered to the current, all the while making futile attempts to grasp what had happened, only to feel vastly unprepared in a seemingly familiar landscape. Then I heard someone’s shouting voice, and the raft suddenly appeared just within reach. A strong pair of hands reached out and dragged me into the raft – safe again.

Events Outside our Control – Whether Rafting or being Bereaved

The experience of being swept by the river is emblematic to me of losing a loved one through death. The overwhelming sensation of being at a complete loss, flooded with sorrow, incapacitated with aching. Consciously breathing, but not sensing any oxygen. Feeling like a poisoned dart pierced my heart, spreading gnawing, dark and sticky pain to the extremities. I’ve been told that grief is like an emotional roller coaster – some days are good, some are bad, and some days you just feel numb. For me, grief was more like a monstrous whirlpool of overwhelming feelings, pulling me under and spitting me back out, over and over, with an intention to suffocate and crumble my spirit.

I felt surprised by the intensity and the duration of my anguish, and by the fierce yearning for my loved one. I had time to prepare myself for the loss yet felt completely unprepared when it actually happened. I felt clueless, searching for thoughtful answers to deep questions that I have not yet formulated, frustrated at not being able to make meaning out of something so consuming, powerful and paralyzing.

Grief is an extraordinarily powerful constellation of emotions that can initiate a chain reaction of biochemical events in the body.

Although we think we know what to expect of mourning, the details of every story of loss are individual. While we ponder new ways of comprehending death in life, bereavement researchers study the biochemistry of grief and offer insights into the mechanisms of what happens to our bodies when we’re left with forlorn impermanence.

Interest in bereavement has grown in recent years, recognizing the profound impact of grief on the health of bereaved individuals. Physical manifestations of grief are common – powerful emotions can elicit a wide range of physiological responses in our bodies [1]. For example, changes in sleep patterns – difficulty getting to sleep, waking up in the middle of the night, or wanting to sleep all the time – as well as exhaustion (grief requires a lot of energy) are all too common. Others can include changes in appetite, headaches, muscle stiffness, and stomach upsets. Some can become jumpy and restless, while others, overly sensitive to loud noises or other people. Bottom line is that grief is an extraordinarily powerful constellation of emotions that can initiate a chain reaction of biochemical events in the body.

Physiological Mechanisms for Effects of Grief on Health

Although increased health risks associated with grief are well documented, the mechanisms remain somewhat ambiguous. Research implicates changes in the endocrine, immune, autonomic nervous, and cardiovascular systems in bereaved individuals [2]. The significance of these changes, and why in some these are primarily adaptive physiologic responses while in others these become maladaptive and physiologically deleterious, is not well-understood. But here are some things that clinical science does explain.

Can a Heart Truly be Broken?

Is it actually “broken”? Yes and no. A broken heart is not physically shattered into a million pieces, although it surely feels like it; but it certainly is damaged. Stress insults can injure the heart, inducing loss or damage to the cardiac muscle cells [4]. Because adult hearts cannot effectively repair and regenerate themselves, such damage can manifest as heart disease, hallmarked by dysfunction of cardiac muscle cells, diminished pump function, arrhythmias, and even death.

How Does Stress Injure the Heart?

Released from the adrenal cortex, cortisol promotes arousal and energy mobilization, and it actually increases our capacity to cope with acute stress. Cortisol levels are highest upon waking and reach their nadir in the late evening (Fig. 1). In doing so, cortisol facilitates catabolic processes consistent with its role in anticipation of wakefulness, increased activity and regulation of the stress response. 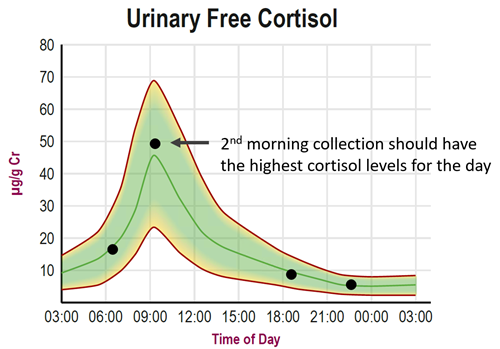 Fig. 1 An example of a normal 24-hour circadian cortisol pattern (green) with 4 urine collections first morning, several hours later, evening, and night before bed (black dots). When measured in urine, cortisol levels in healthy individuals are highest in the 2nd morning collection, capturing the morning peak, and drop steadily throughout the day to low levels at night. High stress can result in high cortisol levels at night and may disrupt sleep.

In the presence of chronic stressors, however, cortisol release becomes sustained throughout the day and the negative feedback mechanism, so important to the self-regulation of the hypothalamic-pituitary-adrenal (HPA) axis, is lost. Persistent stress drives cortisol to higher levels, sustaining this heightened cortisol tone throughout the day and at night, without allowing the cortisol surge to subside.

Numerous studies show persistently elevated cortisol levels in bereaved individuals [5]. Moreover, as the levels of dehydroepiandrosterone-sulphate (DHEA-S) decrease with age (an important immune enhancer) and cortisol levels rise, the newly lopsided cortisol:DHEA-S ratio may have an impact on the health of elderly bereaved, with greater potential for immune dysfunction [6].

This type of a scenario has been associated with increased cardiac risk, reduced immune function and reduced quality of life (reviewed in [2]). Why? Because cortisol increases heart rate and blood pressure – it’s really good at keeping the heart working overtime without allowing it to rest.

Fig. 2 The normal fluctuations of norepinephrine and epinephrine throughout the day show a distinct “inverted-U” fingerprint compared to cortisol’s diurnal pattern. Under basal conditions of little to no stress, norepinephrine and epinephrine levels are low in the first morning urine, reflecting their low levels throughout the night. With the normal stressors of awakening and activity, levels increase, and peak mid-day, and decrease by bedtime returning to low during the night. This normal diurnal pattern is disrupted with excessive stressors (emotional, physical, chemical, pathogenic) resulting in much higher, erratic high to low, or all together suppressed low levels of these catecholamines throughout the day.

The Role of Norepinephrine and Epinephrine

Stress insults can injure the heart, inducing loss or damage to the cardiac muscle cells.

In a stressful event, the sympathetic nerves and the adrenal glands release the “fight or flight” chemicals – norepinephrine and epinephrine (collectively called catecholamines) (Fig. 2). Rising heart rate, escalating blood pressure, increasing respiration rate and activation of sweat secretion are sure signs that the body is pumping out massive amounts of norepinephrine and epinephrine to prepare us for action. This system, however, is only intended for acute situations of immediate threat. If the stressors persist, and the body continues to be bathed in supraphysiological levels of catecholamines day after day, heart injury can eventually occur [7].

Research shows that profound emotional activation as seen in times of grief is accompanied by high catecholamine levels [8]. Bereaved individuals have been reported to have increased heart rate [9], high blood pressure [10], stress cardiomyopathy [11] and even sudden cardiac death [12].

Stress and a Broken Heart in a Nutshell

Fig. 3 Emotional trauma can precipitate heart dysfunction through a series of dysregulated neuroendocrine and autonomic responses. Adapted from [13].

How Does this Affect My Ability to Deal with Grief?

Oddly enough, understanding the physiology of grief helps me cope. Every article of every research study is like putting together a little square inch snapshot of one massive mural in my own story of bereavement. I guess, if I’m not spending time checking off the stages of denial, anger, bargaining, depression, and acceptance, I may be seeking validation that what I feel is real. Perhaps this is all about me trying to grasp and process the difficulty of loss, and how to further structure my life around it. Reading and talking about the deleterious effects of grief also serves as a reminder for me to be more patient and kind towards myself during this time. In the midst of a global COVID-19 pandemic, we all have something that we’re grieving for. I hope this reminds you to be patient and kind towards yourself too.