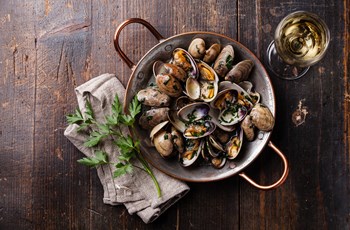 Following on from part 1 of this 3-part blog series discussing 3 important nutrients that can enhance our immune function against viral infection as well as regulate the inflammatory response to COVID-19, this second part of the series discusses the essential mineral zinc.

The Many Roles of Zinc

The body uses zinc in countless ways. After iron, zinc is the most abundant trace mineral in the body and is present in every cell. Zinc is necessary for the activity of over 50 enzymes that aid in metabolism, digestion, nerve function and many other processes. We need zinc for gene expression, immune function, protein and DNA synthesis, reproductive function, wound healing, and growth and development [1]. Zinc is involved in both innate and adaptive immunity and influences immune cell proliferation and maturation. Phagocytosis, natural killer cell and cytokine production all require adequate zinc. Zinc status affects the growth and function of T and B cells and also the balance between T cell subsets contributing to an effective immune response and inflammation resolution. The ability of zinc to function as an antioxidant and stabilize cell membranes suggests that it has a role in the prevention of free radical-induced injury during inflammatory processes [2]. Zinc also maintains anti-inflammatory activity by decreasing pro-inflammatory mediators and reducing reactive oxygen species (ROS) which regulates the progression of inflammation.

The essentiality of zinc was only recognized approximately 50 years ago in the Middle East where zinc deficient patients died from severe immune dysfunction. In addition to being zinc deficient, their diets were also high in cereals and grains which contain phytates that prevent zinc absorption. Even today, zinc deficiency is prevalent in developing countries where populations depend on cereal proteins as a major food source. The World Health Organization (WHO) assumes that approximately one-third of the world’s population is zinc deficient. Risk groups include the elderly and those with chronic inflammatory diseases and cancer. Published research shows that zinc deficiency is also strongly associated with the comorbid conditions predisposing to a poor prognosis of COVID-19 – pulmonary disease, cardiovascular disease, kidney disease, obesity and diabetes [3]. Each of these disorders has an inflammatory component, in which zinc is shuttled into cells and used for protein synthesis and neutralization of free radicals propagated by underlying inflammation, leading to reduced plasma levels of zinc.

Moderate zinc deficiency symptoms include growth retardation and male hypogonadism in adolescents, rough skin, poor appetite, cognitive impairment, delayed wound healing, cell-mediated immune dysfunctions, decreased lean body mass and neurosensory changes including impaired taste and smell, as well as night blindness. It is interesting to note that one of the presenting symptoms of COVID-19 is a loss of taste and smell which may be associated with an increased cellular uptake of zinc to inhibit viral replication [4]. Even a mild zinc deficiency can result in oligospermia and decreased testosterone in males along with decreased natural killer cell activity, decreased IL-2 production and decreased thymus gland activity [2]. In consideration of decreased testosterone production in the presence of zinc deficiency, low testosterone in males has been associated with a poor prognosis of COVID-19 [5]. It is important to note that zinc deficiency in males is not the only cause of low testosterone. Age, obesity, type 2 diabetes, chronic illness, injury, genetic disorders and general nutritional status can also have an impact on testosterone production.  It is clear, however, that even a mild zinc deficiency can negatively impact biochemical and immunological function [2].

Effects of Zinc Deficiency on Immunity

Zinc deficiency decreases innate and adaptive immunity and allows a permissive environment for increased inflammatory cytokines and oxidative stress. The good news is that in experimental human models, all compromised immune activity that was initiated during a zinc-depletion phase was corrected upon zinc repletion. These studies also suggest that cell-mediated immune dysfunction in the presence of zinc deficiency may be due to an imbalance between Th1 and Th2 cell function. Production of IFN-gamma and IL-2 (products of Th1) were decreased, whereas production of IL-4, IL-6, and IL-10 (products of Th2) were not affected during zinc deficiency [2]. In a study done on children under 5 years of age with pneumonia, supplementation with zinc improved production of IFN-gamma and IL-2 in addition to improving respiratory rate and oxygen saturation [6]. Zinc is also an essential component of the pathogen-eliminating signal transduction pathways leading to neutrophil extracellular traps (NET) formation that trap and kill invading microorganisms, without potentiating excess inflammation and microvascular thrombosis that can be associated with NET activity [7].

Immune system hallmarks of zinc deficiency include thymic atrophy, lymphopenia and compromised cell and antibody-mediated responses resulting in increased infections and compromised immune response. It has been observed that COVID-19 patients with lymphopenia have a poor prognosis. In rodent studies, lymphocyte counts were normalized upon zinc supplementation and there is a large body of research stating that zinc supplementation is necessary to reverse lymphopenia [3]. In chronic zinc deficiency, the immune system adapts to function differently beginning with the activation of the stress response (HPA axis activation) which results in excessive production of glucocorticoids (cortisol) that accelerates apoptosis of pre-B and pre-T cells leaving the thymus in a state of atrophy. Elevated cortisol also mobilizes stored glucose, triggering the release of insulin and exacerbating glucose dysregulation along with the imbalanced inflammatory response often associated with this physiological state, which is a common comorbid condition of COVID-19.

As an antioxidant, zinc induces the production of metallothionein, which is rich in cysteine and is an efficient scavenger of hydroxide ions. Zinc also inhibits the activity of NADPH, a group of oxidase enzymes that catalyze the conversion of oxygen to oxide ion. Both hydroxide and oxide are reactive oxygen species (ROS) that inflict cellular damage through oxidative stress and inflammation [2]. Zinc may also decrease oxidative stress by decreasing inflammatory cytokines which also contribute to the generation of ROS. Additionally, zinc reduces inflammation by modulating Nuclear Factor Kappa-B (NF-kappa B), a transcription factor that is the master regulator of pro-inflammatory responses.

Zinc also has direct antiviral functions in that it can inhibit the entry and replication of a virus within the cell. Zinc can prevent fusion of the virus with the host cell membrane, block viral particle release and can destabilize the viral envelope resulting in decreased viral replication. Zinc supplementation can also decrease RNA synthesis of SARS-CoV by directly inhibiting RNA polymerase activity [3]. When combined with EGCG, quercetin, chloroquine or hydroxychloroquine, the ability of zinc to reduce viral replication is enhanced by its increased cellular concentration which is attributed to the action of each of these compounds as an ionophore that efficiently transports zinc across cell membranes.

In addition to cellular protection from viruses, zinc supports mucosal barriers to protect the body from infection. In animal studies, zinc supplementation increased ciliary beat frequency within bronchial cilia, improving removal of viral particles and reducing the risk of secondary infections [3]. Zinc has proven effective in preserving the integrity of respiratory epithelia thus preventing viral penetration through support of tight junction proteins in the lungs. Zinc may also affect the molecular structure of ACE-2 receptors in pneumocytes, thereby reducing the binding affinity of the virus to this receptor [3]. The ACE-2 receptor is the cellular entry site for the SARS-CoV-2 virus.

When combined with EGCG, quercetin, chloroquine or hydroxychloroquine, the ability of zinc to reduce viral replication is enhanced by its increased cellular concentration which is attributed to the action of each of these compounds as an ionophore that efficiently transports zinc across cell membranes.

Zinc is found in grains, nuts, legumes and animal-based foods. Shellfish, beef, and other red meats are rich sources of zinc, with oysters having the highest content by far. Bioavailability from animal-based foods is high as they are rich in sulfur-based compounds that improve zinc absorption. Nuts and legumes are good plant sources of zinc with relatively good bioavailability. Zinc in whole grains and plant proteins has less bioavailability due to their high content of phytate which inhibits zinc absorption.

Numerous controlled trials and meta-analyses have proven zinc’s potential as a potent immune support supplement especially in the presence of respiratory infections. The RDA for zinc is 11 mg daily for men and 8 mg daily for women with the tolerable upper limit intake (UL) set at 40 mg per day. Short-term dosing at 60 mg per day for treatment of deficiency or used as immune support is tolerable for two weeks without risk of copper deficiency. However, high dose zinc supplementation for an extended period can inhibit copper bioavailability by inducing the synthesis of metallothionein, a copper-binding protein [8].

Zinc lozenges that slowly dissolve in the mouth and saturate the oropharyngeal tissue, the site at which we would most likely encounter a virus, is the most recommended form of zinc supplementation. Zinc tablets or capsules should not be taken on an empty stomach as they may induce nausea. The zinc in lozenges is absorbed more slowly which decreases the chance of nausea.

In the final part of this 3-part series we will examine the role for Vitamin C, which has been used to prevent and treat viral infections since Linus Pauling, PhD endorsed its benefits decades ago.