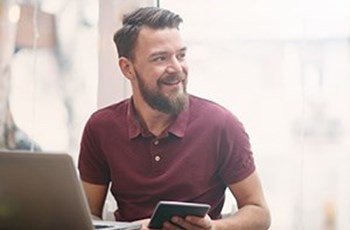 Glutamate (L-glutamic acid) and GABA (gamma-aminobutyric acid) are, respectively, the principal excitatory and inhibitory neurotransmitters in the CNS and play a significant role in HPA axis function and mood [1]. These two amino acid-based neurotransmitters account for over 50% of the synapses in the brain, while the monoamines (serotonin, norepinephrine and dopamine) account for only about 5% [2].

Glutamate is required for synaptic transmission and plasticity, and learning and memory. However, abnormal function of the glutamatergic system can lead to neurotoxicity, and has been implicated in the pathophysiology of several disorders, including amyotrophic lateral sclerosis (ALS), epilepsy, Huntington’s disease, Alzheimer’s disease, schizophrenia, depression and anxiety disorders [3].

Glutamate signaling from the prefrontal cortex and hippocampus, through activation of N-methyl-D-aspartate (NMDA) receptors on the parvocellular neurons of the paraventricular nucleus, increases HPA activation [4]. Subjects with depression (MDD) and bipolar disorder have notably higher glutamate levels, perhaps linking glutamate excitotoxicity with depression-related HPA axis activation. It is not known why glutamate levels (plasma and brain) are elevated in depressed subjects, but the potential to modulate glutamate signaling remains a promising area of research.

NMDA receptors are primarily responsible for the regulation of glutamate activity. Abnormalities in NMDA receptor expression and binding affinities have been identified in patients with mood disorders [5]. Alterations in glutamate binding through the glycine binding site on the NMDA receptor were identified in the frontal cortex of age-matched, post-mortem and interval-matched suicide victims [6]. NMDA antagonists have been found to have antidepressant activity, while chronic antidepressant administration, including monoaminergic-based and trycyclic antidepressants, regulate NMDA receptor function and expression [7]. Omega-3 fatty acids, considered to be helpful in some subjects with depression, have been shown to affect glutaminergic neurotransmission within the hippocampus [8].

Magnesium deficiency causes glutamate receptor (N-methyl-D-aspartate) calcium channels to open, resulting in an increase in glutaminergic activity and neuronal dysfunction. Both zinc and magnesium appear to modulate glutamate to nontoxic levels, preventing damage to the hippocampus and amygdala [9].

Studies in depressed subjects suggest a higher likelihood of low magnesium, and find some benefits associated with the use of supplemental magnesium, though more research is needed to make specific dose recommendations [10]. The role of magnesium is important enough in all metabolic processes that clinicians should consider measuring magnesium levels in depressed subjects and those with suspected HPA axis abnormalities. Clinicians should also be aware that most multivitamin-mineral products contain very little magnesium, or contain poorly absorbable forms of magnesium, such as MgO.

Serum zinc is also notably lower in depressed subjects [11]. Zinc supplementation (usually 25 mg zinc/day) has been used in several clinical trials with depressed subjects (often with antidepressant drugs) with some benefits, even when zinc levels are not measurably low [12].

Balancing excitotoxic levels of glutamate is of vital importance in relieving depressive and anxiety disorders, as well as certain severe neurological conditions. GABA is the primary inhibitory neurotransmitter within the CNS, serving as an important counterpart to the excitatory activities of glutamate. More specifically, GABA has been identified as the dominant inhibitory neurotransmitter within the hypothalamic paraventricular nucleus (PVN) where it exerts significant inhibitory tone upon HPA axis function [13]. Lower plasma GABA levels have been reported in depressed and bipolar patients, levels which persist even after treatment with antidepressants [1]. Hypoactive GABAergic transmission within the PVN is therefore unable to properly down-regulate the HPA axis.

Increasing GABAergic activity can be accomplished by several non-pharmacological means (benzodiazepines are potent modulators of the GABA-A receptor, while gabapentin is a structural analog of GABA). A wide variety of natural ingredients, particularly flavonoid compounds are being explored for their GABAergic activities [14] [15]. Food sources of GABA are limited, but can be found in some fermented foods, such as kimchi, kefir, miso, sauerkraut, tempeh and some yogurts. Clinical studies using food-derived GABA with HPA axis-related outcomes have not been reported. PharmaGABA®, a naturally-sourced form of GABA purified from a fermentation process using the bacterial Lactobacillus hilgardii, has been investigated in humans, specifically examining its anxiolytic and immune-supporting effects during stress exposure.

In a double-blind study using 13 healthy volunteers, electroencephalogram (EEG) readings were obtained after 100 mg of PharmaGABA® were administered in distilled water [16]. These results were compared to distilled water alone (placebo) and distilled water containing 200 mg of L-theanine on separate days (7 day intervals). EEG waves were recorded at 0, 30 and 60 minutes after each administration. PharmaGABA®produced a statistically significant increase in alpha waves, as well as a significant decrease in beta waves, when compared to the placebo. A significantly higher alpha to beta brain wave ratio was also found, even when compared to L-theanine administration.

In a separate study, Abdou et al. examined the effects of PharmaGABA® using eight healthy volunteers with a history of acrophobia. Salivary IgA levels were measured as a biomarker for stress and immune response. Each participant was randomly assigned to either an experimental or placebo group. The participants crossed an extended pedestrian bridge while saliva samples were collected before crossing and at the middle and end of the bridge. The placebo group was found to have a decrease in IgA levels (decreased immune response) while the PharmaGABA® group showed significantly higher levels. While additional studies of a larger size would help to demonstrate the immune and anxiolytic effects of GABA supplementation, these studies do point to the potential benefits of PharmaGABA® in HPA-related stress, worry and anxiety following one hour of administration [17].

Some of the most potent modulators of the GABA-A receptor are steroid compounds known as neurosteroids [18]. Neurosteroids include a wide-range of pregnenolone-derived compounds, including DHEA, DHEA-S, pregnenolone-S, allopregnanolone (ALLO), and allotetrahydrodeoxycorticosterone (ALLO-THDOC). As the name implies, neurosteroids are compounds that have receptor-mediated neuromodulatory activities, although some clearly have other functions as well (e.g., DHEA acts as a precursor to androgens). There is some dispute about where the majority of these compounds are derived. They can be made in the brain, but several can enter the brain from the circulation (presumably made in the adrenal gland). Little is known about the regulation of their synthesis.

ALLO, the major neurosteroid in the brain, and ALLO-THDOC modulate feelings of depression and anxiety, as well as HPA axis stress. They affect several different pathways, including the GABA, glutamate, progesterone, and dopamine pathways [19] [20]. Stress-induced reduction in the levels of ALLO and ALLO-THDOC lowers the inhibitory GABAergic transmission, allowing the HPA axis to become overactive. This blunted neurosteroid signaling is considered to be a critical mechanism in the vicious cyclical pathology of recurrent depression. In several studies, both plasma and CSF ALLO concentrations have been found to be decreased in patients with MDD and anxiety [21] [22]. In patients with depression, an inverse relationship between ALLO concentrations and the severity of depressive illness has been reported [23]. In animal studies, pretreatment of rats with ALLO, ALLO-THDOC or progesterone has been shown to attenuate stress-induced increases in plasma ACTH and cortisol [24].

The use of supplemental DHEA and pregnenolone is common in clinical practice today. Many clinicians believe that the function of these hormones (usually consumed orally or sublingually) is primarily within the adrenal glands or in peripheral target tissue. However, in the case of pregnenolone specifically, oral doses appear to have demonstrable effects on neurological function (i.e. as a neurosteroid). In other words, oral pregnenolone appears to function as a precursor for CNS pregnenolone-S, and perhaps other neurosteroids like ALLO or ALLO-THDOC. For instance, ALLO serum levels have been reported to triple two hours after oral administration of 400 mg pregnenolone [25]. DHEA is also capable of passing into the CNS from the blood, and may also contribute neurosteroid effects [26].

[22] Strohle A, Romeo E, Hermann B, et al. Concentrations of 3alpha-reduced neuroactive steroids and their precursors in plasma of patients major depression and after clinical recovery. Biol Psychiatry 1999;45: 274-277.