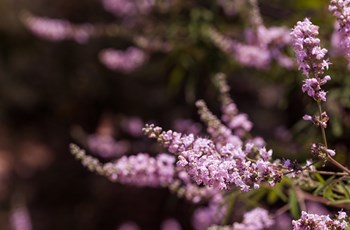 One of the most commonly used herbs in the botanical toolbox is Vitex agnus-castus, also known as chaste tree berry. During the Middle Ages the dried berries were used in monasteries as a peppery condiment that was said to help suppress libido. Additionally, in the mid-1900s, Vitex was often given to women for “sexual irritability,” nervousness and melancholia. Perhaps for these reasons the herb was regarded as a symbol of chastity and has been known by names such as monk’s pepper, Abraham’s balm and chasteberry. Through the years it was often used to support lactation and stimulate or increase menstruation. Today Vitex helps regulate menstrual periods, reduces symptoms of premenstrual syndrome (PMS) and helps to manage symptoms of polycystic ovarian syndrome [1].

Constituents found in Vitex include essential oils (monoterpenes, diterpenes and sesquiterpenes), flavonoids/flavones (casticin, vitexin) and iridoid glycosides (aucubin and agnoside). There is likely some benefit in using extracts from the entire herb, leaf and berries, due to the synergistic activity between the many active elements found in Vitex. Often there is a dose dependent aspect to herbal preparations for eliciting the desired effects. Larger doses of the whole plant may be needed to obtain the same or similar results as a smaller, more concentrated dose of an extract of a particular constituent. However, with research being done on herbs, their chemical components and effects, standardized extracts have evolved.

What Hormone Imbalances Are We Talking About?

Insufficient luteal progesterone production is a common denominator in menstrual cycle disturbances, whether anovulatory or ovulatory. Two factors that contribute to irregular cycles and/or luteal phase defect are inadequate development of the endometrium resulting in problems with implantation and an inadequately functioning corpus luteum. These situations have been correlated with increased prolactin production or hyperprolactinemia.

Prolactin is a hormone from the pituitary gland generally associated with stimulating breast milk production after childbirth. It’s also secreted in response to eating, ovulation, low dopamine levels and stress. Less common, prolactin can also be elevated due to a usually non-cancerous pituitary tumor or prolactinoma.

Vitex contains dopaminergic constituents that bind with dopamine D2 receptors in the anterior pituitary, leading to inhibition of prolactin. Two studies examined the effect of Vitex on hyperprolactinemia. In one study, 20 mg capsule of Vitex dried fruit extract was compared with placebo in 52 women with high prolactin. Therapies were administered every evening for 3 months. In contrast to placebo, the Vitex extract significantly reduced prolactin concentrations, lengthened the luteal phase by 5 days, normalized mid-luteal progesterone levels and increased estradiol. The other study consisted of one group of 40 women with mild elevations of prolactin and another group of 40 women with cyclic mastalgia. Both groups received 40 mg Vitex dried fruit extract daily compared to bromocriptine (5 mg), a medication used to treat high prolactin. After 3 months, significant drops in prolactin levels were observed in both groups. In addition, mastalgia was significantly decreased with both therapies, with no significant difference in effects between the 2 treatment groups. However, patients treated with bromocriptine experienced nausea and vomiting, whereas there were no adverse effects with the Vitex. Surprisingly, 2 women in the Vitex group became pregnant, which suggests the herb had additional impact on ovulation and the corpus luteum that the bromocriptine did not have [2,3].

Premenstrual syndrome (PMS) is a combination of symptoms that almost 90% of women experience in the week or two prior to the onset of their period. Symptoms may include mood swings, irritability, tender breasts, food cravings, fatigue, depression, headaches, and bloating or water retention. Symptoms of premenstrual dysphoric disorder (PMDD) can include those of PMS, but are usually more debilitating, affecting daily living. Specific PMDD symptoms can include anger, anxiety, poor concentration and sleep problems. Both PMS and PMDD are thought to be related to changes in hormonal levels during the cycle.

Several clinical trials using Vitex agnus castus as a treatment for PMS symptoms showed it to be superior to placebo.

Several clinical trials using Vitex agnus castus as a treatment for PMS symptoms showed it to be superior to placebo. Women with mild to moderate symptoms, including breast fullness, bloating, headache, menstrual pain, sleep disturbances, irritability and mood changes, felt significant improvement with the Vitex therapy compared to placebo. Slightly different formulations and dosages of the herb were used in each trial, over a 3-month course, with most of the benefit seen in the third month. The oral dosages commonly ranged from 20-40 mg of dried, ethanol extracted herb and were dosed either the week before the menses or once daily throughout the cycle. Unfortunately, most of the preparations used were not disclosed. Only 2 of the trials revealed standardized extract products. One was standardized for the constituent casticin, another standardized to agnoside [2,3,4,5,6,7,8,10,13].

Vitex was also investigated as a therapy for symptoms of PMDD, which often involves feelings of sadness and/or worthlessness, depression, anxiety and lack of interest in life, as well as some of the common symptoms of PMS. Two trials contrasted the performance of Vitex to fluoxetine (Serafem), a selective serotonin reuptake inhibitor (SSRI), advertised for the treatment of PMDD. After 8 weeks, the conclusion of both trials showed Vitex as a valid alternative to fluoxetine for many of the physical symptoms, although the latter may be slightly more effective for the psychological symptoms of PMDD [11,12].

Studies have assessed Vitex as a therapeutic option for alleviating some common symptoms of the transition of menopause.

Although most commonly used for symptoms and conditions in premenopausal women, studies have assessed Vitex as a therapeutic option for alleviating some common symptoms of the transition of menopause.

A Korean study with 2 groups of women were followed over 8 weeks using the Greene Climacteric Scale Questionnaire. One group was given a 30 mg capsule of Vitex extract and the second group was given an identical capsule containing a placebo. Both groups were dosed morning and night. At the end of the trial, the questionnaire scores for each group were evaluated and compared. The total scores for anxiety and vasomotor dysfunction were significantly reduced with the Vitex extract compared to placebo. However, depression, somatic complications (pain, fatigue) and sexual dysfunction did not show a statistically significant difference from the placebo [9].

Vitex therapies were generally well tolerated, with a good safety profile, during the treatment course in all studies. Reports of the few adverse events, such as nausea, acne, urticaria and headache, were mild and infrequent compared to placebo, bromocriptine or fluoxetine. It should be noted that Vitex may interfere with the effectiveness of oral contraceptives. And while Vitex has a history of support for breastfeeding, it may interfere with milk production through suppression of prolactin and is generally contraindicated during pregnancy and lactation [14].

With a long history of use and few undesirable outcomes documented with its use, Vitex agnus castus can be a valuable botanical alternative for some common female reproductive disorders, especially where symptoms and laboratory testing suggest luteal phase progesterone deficiency.

ZRT’s Menstrual Cycle Mapping test provides a detailed, multi-point map, that gives patients a complete picture of their hormone levels over the course of one menstrual cycle. This allows providers the ability to create more precise treatment plans to help their patients get back to balance. Order your menstrual cycle mapping test today.

[1] Principles and Practice of Phytotherapy, by Simon Mills and Kerry Bone, 2000, Churchill Livingstone.